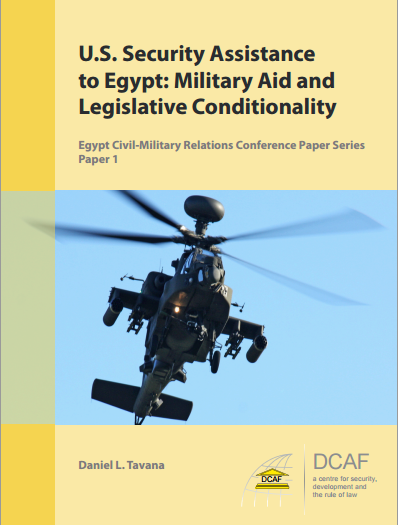 The U.S. provides Egypt with roughly $1.3 billion in security assistance annually, primarily in the form of Foreign Military Financing (FMF) grants. Since 2011, U.S. security assistance has come under increasing criticism. This paper analyzes U.S.-Egypt security cooperation in light of post-2011 developments. Following an overview of U.S. assistance, subsequent sections analyze the legal framework and relevant legislation, particularly in light of the July 2013 removal of President Morsi from office. Subsequently, an analysis of military training and legislative conditionality is presented, with a view towards opportunities for reform. Concluding the paper, several policy recommendations are made for U.S. policymakers to more meaningfully support the development of balanced civil military relations in Egypt and prioritize respect for human rights and the rule of law.

This research paper is the first in a series of papers that were prepared for the conference “Security Sector Governance in Egypt; Focus on Civil-Military Relations,” organized by the Geneva Centre for the Democratic Control of Armed Forces (DCAF) in Montreux, Switzerland, on April 2-4, 2014.

Daniel Tavana is a PhD student in the Department of Politics at Princeton University. Previously, he worked as a research associate at the Project on Middle East Democracy (POMED). Tavana holds degrees from Cambridge University and the Kennedy School of Government at Harvard University, where he worked at the Belfer Center and co-founded the Harvard Journal of Middle Eastern Politics and Policy. His research interests include elections, voter behavior, and democratization in the Middle East and North Africa. He speaks Farsi and has conducted field research in Egypt and Tunisia. His articles have been published by CNN, the Atlantic Council, and the Carnegie Endowment.