The United States and Egypt: Updating an Obsolete Relationship 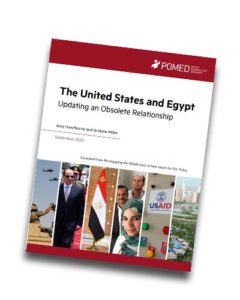 In Egypt, as in several other places in the Middle East, the United States is overinvested in a country (1) whose importance to the United States has declined in recent decades, but which Washington cannot afford to ignore; (2) that often is not an effective or willing partner in advancing U.S. priorities; and (3) whose government’s repression and poor economic management pose significant threats to stability and thus to U.S. interests.

In “The United States and Egypt: Updating an Obsolete Relationship,” a chapter excerpted from the book Re-engaging the Middle East: A New Vision for U.S. Policy (Brookings Institution Press, 2020), POMED’s Amy Hawthorne and Andrew Miller argue that the next U.S. administration should change course and craft a more constructive policy toward Egypt. This chapter describes core American interests in Egypt, reviews recent U.S. policy there, and explains how the United States should recalibrate a relationship that, in its present form, has outlived its usefulness. Read the chapter here.

The views expressed are solely those of the authors and not those of the U.S. Government, the Department of State, or the U.S. Mission to the United Nations.