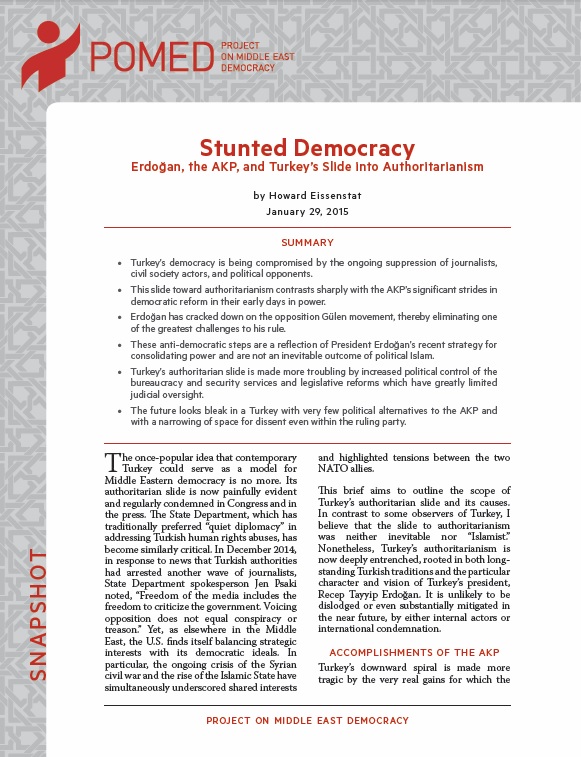 The once-popular idea that contemporary Turkey could serve as a model for Middle Eastern democracy is no more. Its authoritarian slide is now painfully evident and regularly condemned in Congress and in the press. The State Department, which has traditionally preferred “quiet diplomacy” in addressing Turkish human rights abuses, has become similarly critical. In December 2014, in response to news that Turkish authorities had arrested another wave of journalists, State Department spokesperson Jen Psaki noted, “Freedom of the media includes the freedom to criticize the government. Voicing opposition does not equal conspiracy or treason.” Yet, as elsewhere in the Middle East, the U.S. finds itself balancing strategic interests with its democratic ideals. In particular, the ongoing crisis of the Syrian civil war and the rise of the Islamic State have simultaneously underscored shared interests and highlighted tensions between the two NATO allies.

This brief aims to outline the scope of Turkey’s authoritarian slide and its causes. In contrast to some analyses of Turkey, this brief considers the slide to authoritarianism to be neither inevitable nor “Islamist.” Nonetheless, Turkey’s authoritarianism is now deeply entrenched, rooted in both long-standing Turkish traditions and the particular character and vision of Turkey’s president, Recep Tayyip Erdoğan. It is unlikely to be dislodged or even substantially mitigated in the near future, by either internal actors or international condemnation.

Howard Eissenstat is currently an assistant professor of Middle East history at St. Lawrence University. Eissenstat writes on twentieth century Turkish history as well as contemporary Turkish politics and foreign policy. He has lectured at the Foreign Service Institute of the U.S. Department of State and the Canadian Foreign Service Institute. He received his PhD in Modern Middle East History from UCLA in 2007 and was a post-doctoral fellow at Brandeis University in 2008–2009.

Photo credit: Office of the President of Russia