To read this snapshot as a PDF, click here. 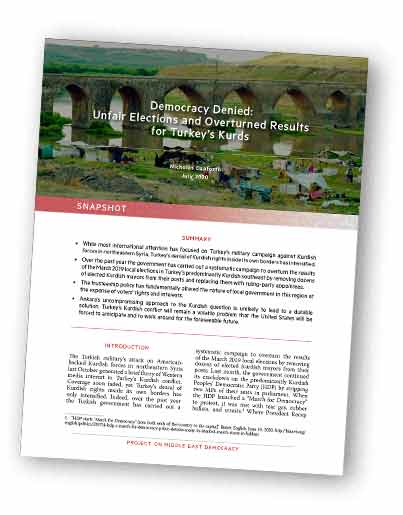 The Turkish military’s attack on American-backed Kurdish forces in northeastern Syria last October generated a brief flurry of Western media interest in Turkey’s Kurdish conflict. Coverage soon faded, yet Turkey’s denial of Kurdish rights inside its own borders has only intensified. Indeed, over the past year the Turkish government has carried out a systematic campaign to overturn the results of the March 2019 local elections by removing dozens of elected Kurdish mayors from their posts. Last month, the government continued its crackdown on the predominantly Kurdish Peoples’ Democratic Party (HDP) by stripping two MPs of their seats in parliament. When the HDP launched a “March for Democracy” to protest, it was met with tear gas, rubber bullets, and arrests.[1] Where President Recep Tayyip Erdoğan once hoped to employ more sophisticated means to control Kurdish nationalism, he has fallen back on the tradition of crude repression that has already brought Turkey decades of instability.

For anyone in Washington concerned with the future of Turkish democracy or with stabilizing northeastern Syria, it is crucial to understand the scope and intensity of Erdoğan’s current campaign against Kurdish politicians. The ongoing disenfranchisement of Kurdish voters is just the latest indication of how intractable Turkey’s Kurdish conflict has become. It will remain a volatile problem that the United States will be forced to anticipate and to work around for the foreseeable future.

The current incarnation of Turkey’s war with its Kurdish nationalist movement began in the 1980s, when the country’s long-standing assimilationist policies and denial of Kurdish cultural rights helped spawn a violent separatist insurgency led by the Kurdistan Workers’ Party (PKK). The state responded with a brutal counter-insurgency campaign. A series of political parties affiliated with the PKK were banned and Kurdish politicians and activists were arrested, tortured, and, in some cases, killed. After four decades of fighting, the total death toll from the conflict is estimated at more than 40,000 combatants and civilians.[2]

After coming to power in 2002, Erdoğan’s Justice and Development Party (AKP) initially pursued a different approach to the conflict. The AKP believed it could defeat Kurdish nationalism by winning over Kurdish voters at the ballot box. It sought to use a policy of promoting peace, extending Kurdish language rights, and expanding service provision to pull voters away from Kurdish nationalist parties.

Neither the government’s limited cultural opening, however, nor its attempts at peace negotiations with the PKK proved sufficient to transform Turkey’s political dynamics. The Kurdish nationalist movement has maintained the support of roughly half of Turkey’s Kurdish population, giving the HDP significant electoral majorities in many predominantly Kurdish southeastern provinces.[3]

In the face of this reality—manifested most clearly when HDP voters cost the AKP its parliamentary majority in the June 2015 Grand National Assembly elections—Erdoğan returned to repressive methods. In the summer of 2015, fighting between the Turkish military and the PKK resumed. In parallel, Erdoğan quickly adopted a host of undemocratic measures to address the political threat he saw in the HDP, all the while continuing to insist that the AKP was winning the battle for Kurdish hearts and minds.

During the fighting, PKK-affiliated youth militias seized control of a number of southeastern cities and declared autonomy or self-rule.[4] The government’s violent response left the centers of many of these cities empty and destroyed, displacing as many as 350,000 residents across the region.[5] By the March 2019 elections, life in the southeast had still not returned to normal. Many cities had not been fully rebuilt, or had gone through demographic changes after soldiers, members of the security services, and pro-government residents replaced inhabitants who had been forced to flee.

In the fall of 2016, Ankara formally removed the elected mayors of almost 100 predominantly Kurdish municipalities and replaced them with AKP-appointed kayyums or trustees.[6] The AKP introduced kayyums in 2015 as a means of seizing control of companies linked to the Gülen movement before expanding this practice to the political realm.[7] The government carried out these mayoral takeovers using emergency powers it had assumed in the aftermath of the July 15, 2016 coup attempt, claiming with often-dubious evidence that the sacked mayors had been supporting PKK terrorism in word or deed. Many of these mayors were quickly jailed on “terror” charges, as were the HDP’s co-chairs—Selahattin Demirtaş and Figen Yüksekdağ—and more than a dozen of the party’s parliamentarians. In the fall of 2018, HDP officials estimated that between six and eight thousand party members were in jail. Asked for a more specific figure, one parliamentarian apologized and explained that the party member responsible for keeping track of arrested party members had just been arrested herself.[8]

Against this backdrop, the AKP went into the 2019 local elections claiming that it would now win the municipalities it had seized and, in so doing, vindicate the takeovers. Yet the many steps the government took to manipulate the electoral playing field undermined any possibility of a genuine democratic mandate for the AKP.

First and foremost, the elections took place with HDP’s leadership in jail. In a highly securitized environment, the constant threat of further arrests created obstacles to campaigning and recruiting candidates. And, in addition to restricting HDP supporters’ freedom of speech and assembly, the government ensured that the media systematically denied HDP politicians airtime. The authorities routinely denied the HDP permits to hold election rallies, and rallies that did occur were broken up by the police. Several pro-HDP journalists remained in jail throughout the campaign. A few weeks before the vote, the Supreme Electoral Council (YSK) cited “security concerns” in relocating a number of polling stations across 14 southeastern provinces. HDP officials complained that this tactic, used in previous elections, made it more difficult for their supporters to vote.[9]

Exacerbating all these measures was Erdoğan’s announcement a month before the elections that, regardless of the results in the southeast, his government was prepared to “once again, immediately and without waiting any further, appoint our trustees.”[10] By threatening to undemocratically overturn the outcome, the HDP argued, Erdoğan sought to instill a sense of futility among HDP voters in order to suppress their turnout.

Despite all these repressive measures, when the votes were cast, the AKP was unable to claim the decisive victory it had been hoping for. While the ruling party performed slightly better than it had in the 2014 local elections, the HDP still won 65 municipalities in the southeast, demonstrating its continued political dominance across much of the region. Moreover, the AKP suffered dramatic losses in Ankara and in Istanbul, where the HDP had thrown its support behind winning CHP mayoral candidate Ekrem İmamoğlu. Where Erdoğan had hoped to use the local elections to showcase his party’s success among Kurdish voters, the national debate quickly shifted to how far he might go in trying to overturn the mayoral election in Turkey’s largest city.[11]

As this debate played out, however, the government quickly made it clear that Erdoğan’s earlier threat of removing elected HDP mayors had not been an empty one. Indeed, by June 2020, HDP mayors were left in control of just a dozen of the 65 municipalities the party had won a year earlier.[12]

This disenfranchisement came in several waves. First, immediately after the election, the YSK deemed the HDP mayors of six municipalities ineligible to take office due to ongoing criminal cases against them—despite having previously approved these mayors to run as candidates. The YSK proceeded to award their offices to the AKP runners-up.[13] In August, the government moved against the HDP mayors in the three largest municipalities in the southeast: Diyarbakır, Mardin, and Van.[14] In October, immediately after Turkey’s Syria incursion, the government removed seven more mayors, followed by four more in November and eight more in March 2020. Most recently, on May 15, five additional mayors were removed.[15] The HDP reports that 21 of these ousted mayors remain in jail today.

While the anti-democratic nature of the government’s trusteeship policy is self-evident, the specifics are all the more striking:[16]

According to an anonymous witness, it had been rumored that Süleyman used to come to the municipality occasionally with a laptop and have conversations with Akkul that sometimes lasted about an hour. The witness… said: “I know that Akkul’s family is close with the PKK. I think that [Süleyman] was brought to the PKK through Akkul.[18]

Alongside a host of other supposed counter-terror measures, the kayyums have deepened the oppressive atmosphere across the southeast. Moreover, the government’s replacement of elected HDP mayors with appointed trustees has fundamentally altered the nature of local government in this region at the expense of voters’ rights and interests.

Where it was once possible to discuss what a “solution” to Turkey’s Kurdish question would look like, this language no longer reflects the Turkish government’s uncompromising approach to the issue. Erdoğan and his allies now see themselves locked in a battle for survival with a host of enemies, foreign and domestic. As such, it is difficult to imagine the government pursuing meaningful peace talks with the PKK or easing its crackdown on the HDP. At the same time, the Turkish military’s successes against Kurdish forces in Turkey and Syria over the past five years have not brought Ankara any closer to the decisive victory that has eluded it for the last four decades. Nor has the arrest of HDP politicians and the seizure of HDP-run municipalities broken the party’s base of support amongst Kurdish voters. While the government might consider a tactical truce with the PKK, or perhaps some form of opportunistic outreach to Kurdish voters, such moves are unlikely to lead to a durable solution. For now, at least, an end to the conflict remains out of sight beyond the political horizon.

1. “HDP starts ‘March for Democracy’ from both ends of the country to the capital,” Bianet English, June 15, 2020, http://bianet.org/english/politics/225714-hdp-s-march-for-democracy-police-detains-many-in-istanbul-march-starts-in-hakkari

3. Historically the Kurdish vote has been split between Kurdish nationalist parties and more conservative, religious, and pro-state center right parties. After coming to power in 2002, the AKP consolidated the support of this last group. See Nicholas Danforth, “When Peace is Bad Politics,” Foreign Policy, February 18, 2016, https://foreignpolicy.com/2016/02/18/when-peace-is-bad-politics-turkey-kurds-akp-pkk/

5. “The Human Cost of the PKK Conflict in Turkey: The Case of Sur,” International Crisis Group, March 17, 2016, https://www.crisisgroup.org/europe-central-asia/western-europemediterranean/turkey/human-cost-pkk-conflict-turkey-case-sur

10. “Mayors seen as having links with PKK will be dismissed: Erdoğan,” Hurriyet Daily News, February 25, 2019, https://www.hurriyetdailynews.com/mayors-seen-as-having-links-with-pkk-will-be-dismissed-erdogan-141479

11. The government’s response was to allege fraud and subsequently to force the YSK to rerun the Istanbul election. Only after losing the June 23, 2019 rerun by an even more decisive margin did Erdoğan eventually concede defeat.

12. For a detailed breakdown and mapping of these districts see Michael Daventry, “How the HDP was purged in Turkish local government,” James in Turkey Blog, June 3, 2020. Of the elected HDP mayors who remain, two formally left the HDP and are now independents. http://www.jamesinturkey.com/purging-the-hdp-in-turkish-local-government/

20. “The Trustee Regime in Turkey and the Denial of Right to Vote and Right to be Elected,” November 20, 2019, Peoples’ Democratic Party, https://www.hdp.org.tr/en/kayyim-trustee-report/13740

NICHOLAS DANFORTH is a George F. Kennan Fellow at the Woodrow Wilson International Center for Scholars. He completed a PhD in Turkish history at Georgetown University and has written widely on Turkey and on Middle Eastern politics. He is on Twitter @NicholasDanfort.

Photo: A Kurdish encampment outside the city of Diyarbakır in eastern Turkey on August 14, 1993. Credit: Carl Campbell / Flickr