On Sunday, November 28, Egypt will hold its elections for the People’s Assembly, the lower house of the Egyptian parliament. These elections have drawn widespread attention, including from the U.S. administration, which has repeatedly stated its desire to see free, fair, and transparent elections in Egypt. The White House press readout following a meeting between President Obama and President Mubarak on September 1 stated that “President Obama reaffirmed the importance of a vibrant civil society, open political competition, and credible and transparent elections in Egypt.” This message has since been repeated in Cairo by administration officials including Assistant Secretary of State Jeffrey Feltman, Assistant Secretary of State Michael Posner, and U.S. Ambassador to Egypt Margaret Scobey. 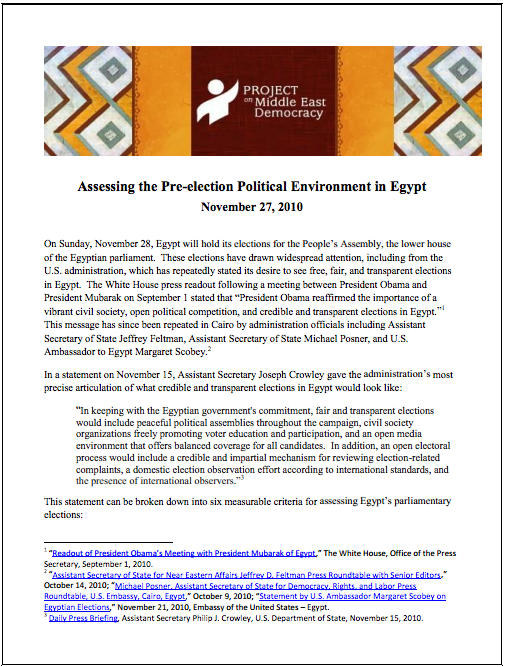 In a statement on November 15, Assistant Secretary Joseph Crowley gave the administration’s most precise articulation of what credible and transparent elections in Egypt would look like: “In keeping with the Egyptian government’s commitment, fair and transparent elections would include peaceful political assemblies throughout the campaign, civil society organizations freely promoting voter education and participation, and an open media environment that offers balanced coverage for all candidates. In addition, an open electoral process would include a credible and impartial mechanism for reviewing election-related complaints, a domestic election observation effort according to international standards, and the presence of international observers.”

Although Election Day still remains, it is clear that the government of Egypt has essentially already failed to run transparent or fair elections, according to all six criteria outlined by the U.S. administration. Given the clear public statements by high-ranking officials, including President Obama himself, about the importance of “credible and transparent elections in Egypt,” the conduct of these elections appear to be a public rebuke to the U.S. administration on the part of the Egyptian government. It now remains to be seen how President Obama and the U.S. administration will respond in the wake of these elections, as observers begin to turn attention toward next year’s presidential elections.