Report – The Federal Budget and Appropriations for Fiscal Year 2015: Democracy, Governance, and Human Rights in the Middle East and North Africa 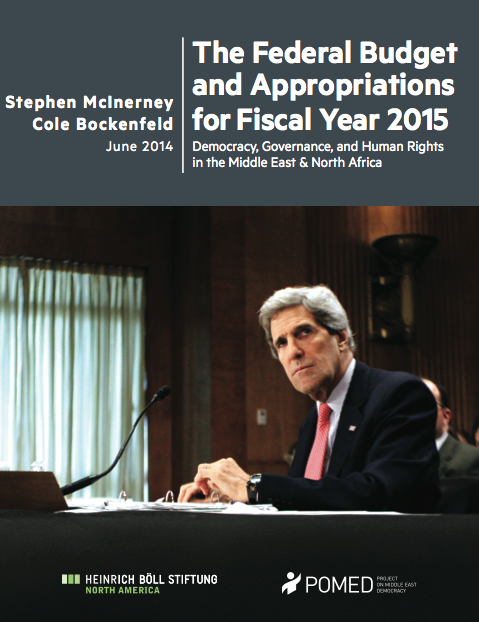 More than three years have now passed since the Arab world was shaken by popular uprisings that brought a swift end to the rule of four of the region’s longstanding dictators and brought hope that accountable, democratic governments could replace corrupt, repressive regimes across the region. 2011 represented a remarkable moment of hope among supporters of democracy in the Middle East and North Africa—not only hope for political change and progress toward genuine democracy on the ground, but also hope that the dramatic events in the region would spur long- overdue fundamental changes in U.S. policy toward this critical region.

Many advocates of democracy believed long before the 2011 uprisings that U.S. engagement with the region was fundamentally flawed in its reliance on nondemocratic governments across the region. Unconditional support for corrupt governments that maintained stability through repression of their citizens generated strong animosity toward the United States, which became seen in the region as the primary external backer of repressive Middle Eastern governments.

In 2011, those who held these views believed that they had been clearly and indisputably proven right. Successive U.S. administrations had—occasional public rhetoric to the contrary notwithstanding— ignored entreaties to focus more on supporting sustainable political and economic reform in the region, but there was a belief in 2011 that these issues could be ignored no longer. Although supporters of democracy had previously failed to convince the U.S. government of the need to change course in the region, there was a belief that the remarkable changes brought by brave citizens of the region standing up to their governments would now force U.S. policy to change despite its reluctance to do so.

Sadly, three years later, those fundamental lessons appear unlearned. There are steadily growing perceptions that the dramatic political changes that erupted in 2011 have had little or no effect on the fundamental approach of the U.S. government to the region, and no significant increase in support for democratic principles has resulted. Unfortunately, an examination of the U.S. federal budget request for Fiscal Year 2015 strongly confirms these perceptions. From examining the trajectory of U.S. assistance to the Middle East and North Africa over the past several years, there is little evidence to suggest that support for democracy, governance, and human rights is now any higher of a priority for the U.S. government than it had been before the uprisings of 2011.

Cole Bockenfeld is the Advocacy Director at the Project on Middle East Democracy (POMED). He has studied the Middle East at the University of Arkansas, Georgetown University, and Al al-Bayt University in Mafraq, Jordan. Prior to joining POMED, he worked for the International Foundation for Electoral Systems (IFES) on electoral assistance programs in Iraq, Lebanon, Morocco, and the West Bank and Gaza, including fieldwork in Beirut and Baghdad. He also conducted research with the Center for Islam and Democracy (CSID) in Amman. His writing on Middle Eastern politics and U.S. foreign policy has been published by the Washington Post, Foreign Policy, Christian Science Monitor, and The Daily Star. He has spoken on Middle East affairs with numerous media outlets including the New York Times, NPR, The Boston Globe, and Al-Jazeera.