Report – The Federal Budget and Appropriations for Fiscal Year 2013: Democracy, Governance, and Human Rights in the Middle East & North Africa 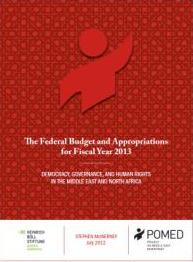 This spring, President Obama submitted his annual budget request to Congress for Fiscal Year 2013, the final such budget of his current four-year term of office. It is always worthwhile to examine annual budgets for signals of policy priorities and changes, but this year’s budget takes on extra importance, as this is the first annual budget request that takes into account the historic changes that have swept the region since early 2011.

President Obama set a high bar for the U.S. response to these changes, promising in May 2011 that the U.S. would support democratic principles with “all of the diplomatic, economic and strategic tools at our disposal,” and that this support would not be secondary to other strategic interests. More than a year later, it is difficult to argue that the administration’s policies and engagement with the Middle East have lived up to such lofty pronouncements, and changes to foreign assistance and support for democracy and governance programming reflect that. Nonetheless, the administration does deserve credit for intensifying its focus on support for democracy, governance, and human rights in some instances.