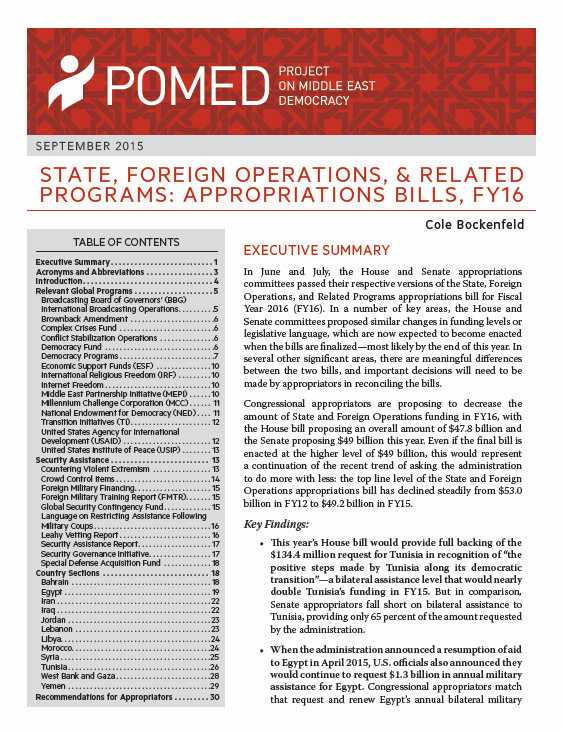 In June and July, the House and Senate appropriations committees passed their respective versions of the State, Foreign Operations, and Related Programs appropriations bill for Fiscal Year 2016 (FY16). In a number of key areas, the House and Senate committees proposed similar changes in funding levels or legislative language, which are now expected to become enacted when the bills are finalized—most likely by the end of this year. In several other significant areas, there are meaningful differences between the two bills, and important decisions will need to be made by appropriators in reconciling the bills.

Congressional appropriators are proposing to decrease the amount of State and Foreign Operations funding in FY16, with the House bill proposing an overall amount of $47.8 billion and the Senate proposing $49 billion this year. Even if the final bill is enacted at the higher level of $49 billion, this would represent a continuation of the recent trend of asking the administration to do more with less: the top line level of the State and Foreign Operations appropriations bill has declined steadily from $53.0 billion in FY12 to $49.2 billion in FY15.

Cole Bockenfeld is the Advocacy Director at the Project on Middle East Democracy (POMED). He has studied the Middle East and global diplomacy at the University of Arkansas, Georgetown University, and the University of London. Prior to joining POMED, he worked for the International Foundation for Electoral Systems (IFES) on electoral assistance programs in Iraq, Lebanon, Morocco, and the West Bank and Gaza, including fieldwork in Beirut and Baghdad. He also conducted research with the Center for the Study of Islam and Democracy (CSID) in Amman. His writing on Middle Eastern politics and U.S. foreign policy has been published by the Washington Post, Foreign Policy, and the Christian Science Monitor. He has spoken on Middle East affairs with numerous media outlets including the New York Times, NPR, the Boston Globe, the Christian Science Monitor, Al-Jazeera, and Alhurra.

Photo credit: Architect of the Capitol