Report – Speaking Clearly: What Should President Obama Say to the Middle East? 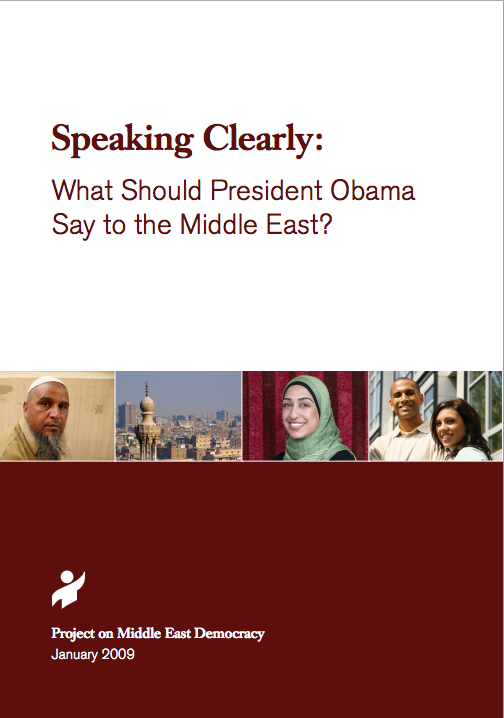 As President-elect Barack Obama prepares to take office this month, the world anxiously awaits the policies of the new American administration.  Amid generally high expectations worldwide, many across the Middle East remain skeptical of the future of U.S. policy toward that region.  The inaugural address on January 20 will be watched carefully and analyzed for signals of changes in policy.  President Obama is also widely expected to give a major foreign policy speech in the Islamic world during his first 100 days in office.  Until now, there has been more debate over where such a speech should be given than over what its content should be.  But that content will be listened to intently and is critically important – when he addresses the expectant audience of the Arab and Muslim World, what should President Obama say?

To help answer this question, we at the Project on Middle East Democracy have asked a dozen respected American foreign policy voices to address the following question in 300 words or less:

At the outset of his administration, what would you advise President Obama to say to the people of the Middle East?

The selected contributors represent a wide spectrum of viewpoints and approaches to U.S. policy in the Middle East – Democrats, Republicans, and nonpartisan analysts; public opinion pollsters and academics; democracy promotion practitioners and human rights advocates. Unsurprisingly, their answers vary, in both substance and in form.  Some write in the first-person, articulating explicitly what the new President ought to say to the region.  Others speak in their own voice, addressing their advice directly to the incoming President.  Most focus solely on the content of what should be said; a few also weigh in on how and where the message ought to be delivered.

While the dozen answers vary, there are a number of themes strongly recurring throughout them: