To read this report as a PDF, click here. 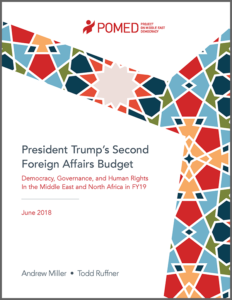 Thus far, President Donald Trump’s administration has validated what many in the pro-democracy community feared at the outset of his presidency. He has weakened U.S. support for universal human rights and democratic values, openly embraced authoritarian leaders around the world, especially in the Middle East and North Africa (MENA) region, and relinquished U.S. global leadership.

The Trump administration’s second budget request for international affairs is a reflection of these troubling trends. Similar to his first budget request, the FY19 request proposes a drastic 23 percent reduction to the State Department and Foreign Operations budget, including a 39 percent cut to democracy and governance funding and a 32 percent cut to humanitarian assistance accounts, compared to the FY18 appropriation. This proposal evinces the administration’s deep skepticism regarding U.S. efforts to promote democracy, human rights, and good governance globally. Combined with the administration’s disregard for diplomacy and all non-military forms of international engagement, including most types of foreign aid, this ambivalence toward democracy promotion has left pro-democracy voices abroad feeling largely abandoned and significantly damaged U.S. credibility with them.

Last year, Congress resoundingly rejected the administration’s proposed funding cuts to foreign assistance. And Congress appears ready to do likewise with the FY19 budget request. As House Foreign Affairs Committee Chairman Ed Royce (R-CA) said, “A strong, bipartisan coalition in Congress has already acted once [in FY18] to stop deep cuts to the State Department and Agency for International Development that would have undermined our national security. This year, we will act again.”

It remains to be seen how or whether new Secretary of State Mike Pompeo will differ from Rex Tillerson in his approach to the State Department’s budget. The FY19 request was released before Pompeo’s appointment, and therefore does not necessarily reflect his thinking or input, but his defense of the President’s proposed cuts to the State Department’s budget during testimony in front of the House Foreign Affairs Committee and the Senate Foreign Relations Committee is not encouraging. While at times he has talked a good game, vowing to help the State Department get its “swagger back,” Pompeo will be unable to restore the morale of U.S. diplomats unless he can convince President Trump to financially and politically support their critical work, including in advocating for democracy and human rights abroad.

For the second consecutive year, President Trump’s Function 150 budget request proposes a sharp cut to overall foreign affairs spending, but Congress seems poised to reject most of these proposed cuts as it did with the previous budget request. The FY19 budget seeks $41.8 billion for foreign affairs, substantially lower than the $54.2 billion enacted in the FY18 Consolidated Appropriations Act. Traditional U.S. allies in the MENA region who receive a disproportionate share of U.S. foreign assistance, like Israel, Egypt, and Jordan, are exempt from these cuts, which means that realizing the proposed cuts to the topline budget would necessitate crippling reductions to foreign aid to dozens of countries around the world. Congress, however, has expressed intense opposition to the proposed cuts once again this year, and it is almost certain it will appropriate funds for the foreign affairs budget well in excess of the request.

The budget would accelerate the securitization of U.S. foreign assistance in the MENA region while deprioritizing democracy and governance support. Security and military aid categories represent nearly 78 percent of the FY19 foreign assistance request. While the $7.0 billion sought in the FY19 request for the Middle East and North Africa is $400 million higher than the FY18 request of $6.6 billion, democracy programming fell to just 4 percent of the request compared to 4.5 percent in FY18. These proposed cuts to democracy programming, including for institutions like the National Endowment for Democracy, demonstrate continued hostility to the promotion of democratic values abroad.

The administration has initiated “reviews” of several bilateral assistance packages that have interrupted U.S. programming and raised questions about the future of assistance to these countries/territories. Reviews of bilateral aid to Syria and the West Bank/Gaza resulting from President Trump’s decisions to suspend in whole or in part assistance to these recipients have put valuable programming on hold for months, and left U.S. officials and implementing organizations unsure of the future of U.S. funding for many long-standing programs. Secretary of State Mike Pompeo also announced the administration would conduct a review of U.S. assistance to Lebanon following recent parliamentary elections in which Hezbollah and its allies appear to have emerged as the winners, which could jeopardize continued support for the Lebanese Armed Forces.

President Trump has so far been unwilling to downsize Egypt’s outdated assistance package, but the administration appears willing to use it as leverage. Though the FY19 request for Egypt is identical to FY18, including $1.3 billion in military assistance, the administration’s August 2017 decision to withhold or reprogram nearly $300 million in assistance for Egypt to encourage policy changes related to human rights and other U.S. concerns was a positive step. With Tillerson’s ouster from the State Department, it is unclear whether his successor is prepared to sustain pressure on the Egyptian government.

The administration once again proposed substantial cuts to Tunisia’s aid package, even though Congress preserved robust assistance levels for the country in the FY18 Consolidated Appropriations Act. In FY18, Congress appropriated $165.4 million in bilateral assistance to Tunisia to support the country’s democratic transition, which was significantly higher than the $54.6 million request from the administration. Though it proposed restoring Foreign Military Financing (FMF) grants for Tunisia, the Trump administration’s proposed reduction to Tunisia’s aid package in FY19 sends the message that the U.S. government is seeking to disengage from the one bright spot of the Arab Spring as threats to the country’s democratic transition are growing.