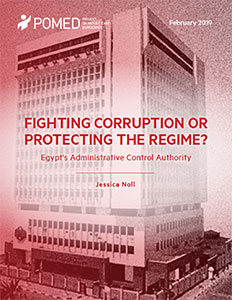 Popular anger over graft, cronyism, and nepotism in the regime of Hosni Mubarak helped to fuel Egypt’s 2011 uprising, and corruption remains a serious problem in Egypt today. President Abdel Fattah al-Sisi, a strongman from the military, has declared that a “comprehensive” effort to eliminate government corruption is one of his priorities. In reality, al-Sisi’s so-called anti-corruption policies have been extremely narrow and motivated by darker concerns.

To “fight corruption” al-Sisi mainly has relied upon a powerful state agency that reports directly to him, the Administrative Control Authority (ACA). The ACA’s main official role is to gather information on administrative and financial violations in the state apparatus and to refer cases to prosecutors when wrongdoing is suspected.

Although the ACA is nominally a civilian body, it shares important features with the security institutions that are the backbone of al-Sisi’s authoritarian regime. The ACA has surveillance powers and can arrest, detain, and interrogate suspects. It has always been led by men from the military or intelligence services, and most of its personnel come from the military and the police. In addition, the ACA answers only to the president and typically operates in an opaque manner. For these reasons, al-Sisi, a career military officer and former defense minister who does not trust civilian institutions, likely prefers the ACA over other oversight agencies.

Al-Sisi has raised the ACA’s profile and assigned it new tasks, while strengthening his control over the agency. He not only had the law changed to put the ACA under his direct authority, he also has one of his sons working there. Since 2014, the ACA has investigated and arrested dozens of officials across the civilian bureaucracy for alleged corruption. At the same time, al-Sisi has made sure that he and his allies are protected from such scrutiny. Significantly, a 2017 law restricts the ACA’s scope to the civilian bureaucracy—excluding from the agency’s purview the military, whose expanding economic role lacks transparency, which encourages mismanagement or even corruption.

This report explains the role of the ACA as an instrument of power in al-Sisi’s regime, part of a wider system of repression and control. The report discusses how authoritarian rulers use corruption and anti-corruption campaigns to maintain their grip on power. It describes the ACA’s mandate and authorities, tracing its evolution from its origins under President Gamal Abdel Nasser through President Mohamed Morsi, whom al-Sisi overthrew in 2013. The report then considers the main functions of the ACA under al-Sisi: targeting certain officials for corruption while leaving others untouched, attracting foreign investment needed to deliver the economic turnaround he has promised, and consolidating his power over the state bureaucracy. It also discusses international assistance to the agency.

The report argues that because the ACA does not meet minimum standards of political independence, transparency, and accountability, treating it as the centerpiece of a genuine anti-corruption campaign is misguided and can even be counterproductive.