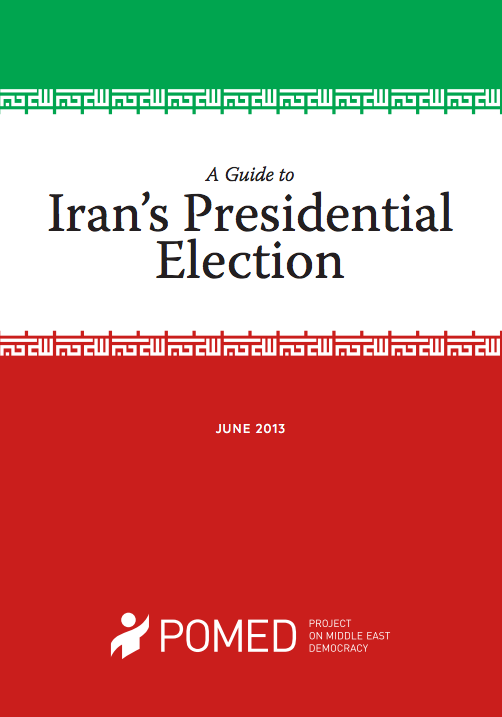 On June 14, Iranians will vote in a presidential election to replace incumbent President Mahmoud Ahmadinejad, whose term ends in August. The election is being held in the shadow of 2009’s contested vote, which prompted massive protests and a subsequent government crackdown that resulted in the arrest, detention, and torture of thousands. Many Iranians are understandably disillusioned, believing the June election to be nothing more than a means by which the Iranian government can reassert its legitimacy and deepen the allegiance of its citizens to the system. Despite these concerns, the election process presents a unique window into the internal debates and disagreements gripping the Islamic Republic.

Supreme Leader Ali Khamenei, and the twelve-person Guardian Council acting under his authority, retains extensive control over the electoral process. It is generally believed that the outcome will be predetermined through vetting, fraud, or both. In 2009, the Supreme Leader’s decision to endorse Ahmadinejad before the Guardian Council had certified the results both violated the election law and undermined faith in the Supreme Leader’s historic role as a neutral arbiter. Factional infighting and elite rivalries have worsened, and the political battles that have typically characterized these rivalries are now being waged publicly—a development that is dramatically affecting the pre-election environment.

Daniel Tavana is POMED’s Research Associate. Before joining POMED, Daniel worked on security and governance issues for a variety of government agencies, such as the Departments of State, Defense, and Treasury. This included work with the State Department’s Office of Iranian Affairs during the 2009 election. Daniel has master’s degrees from Cambridge University and the Kennedy School of Government at Harvard University, where he worked at the Belfer Center and co-founded the Harvard Journal of Middle Eastern Politics and Policy. He speaks Farsi, and his articles on the Middle East have been published by Global Public Square at CNN, Al Monitor, the Atlantic Council, and the Carnegie Endowment for International Peace.