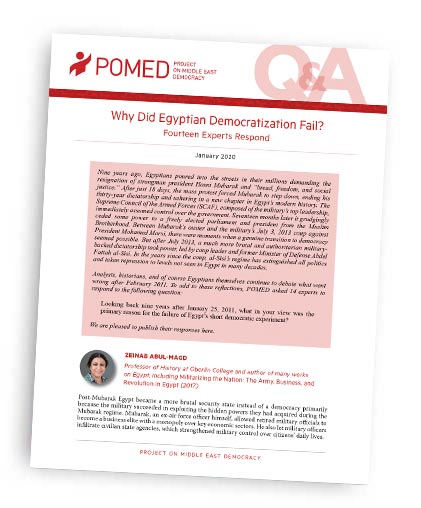 On January 25, 2011, brave Egyptians began pouring into the streets demanding the resignation of strongman President Hosni Mubarak and “bread, freedom, and social justice.” On February 11, in the face of mass protests, the army forced Mubarak to step down, ending his thirty-year dictatorship. The Supreme Council of the Armed Forces (SCAF), composed of the military’s top leadership, immediately assumed control over the government, promising a democratic transition. Seventeen months later it grudgingly ceded some power to a freely elected parliament and president from the Muslim Brotherhood. Between Mubarak’s ouster and the military’s July 3, 2013 coup against President Mohamed Morsi, there were moments when a genuine transition to democracy seemed possible. But after the coup, a new military-backed dictatorship took power, led by coup leader and former Minister of Defense Abdel Fattah al-Sisi. His regime has extinguished all politics and taken repression to levels not seen in Egypt in decades.

Egyptians and foreign analysts continue to debate what went wrong after February 2011. To add to these reflections, POMED asked 14 experts to respond concisely to the following question:

Looking back nine years later, what in your view was the primary reason for the failure of Egypt’s short democratic experiment?

Read the Expert Q&A with responses from: