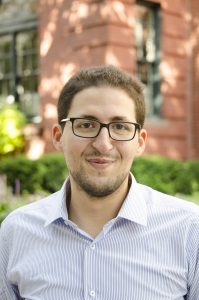 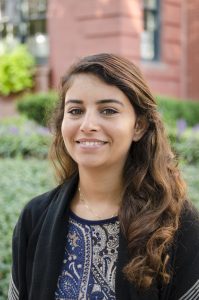 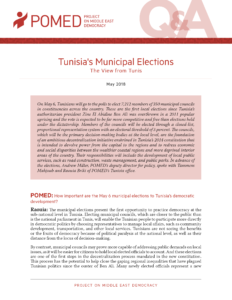 On May 6, Tunisians will go to the polls to elect 7,212 members of 350 municipal councils in constituencies across the country. These are the first local elections since Tunisia’s authoritarian president Zine El Abidine Ben Ali was overthrown in a 2011 popular uprising and the vote is expected to be far more competitive and free than elections held under the dictatorship. Members of the councils will be elected through a closed-list, proportional representation system with an electoral threshold of 3 percent. The councils, which will be the primary decision-making bodies at the local level, are the foundation of an ambitious decentralization initiative enshrined in Tunisia’s 2014 constitution that is intended to devolve power from the capital to the interior regions and to redress economic and social disparities between the wealthier coastal regions and more deprived interior areas of the country. Their responsibilities will include the development of local public services, such as road construction, waste management, and public parks. In advance of the elections, Andrew Miller, POMED’s deputy director for policy, spoke with Tammem Mahjoub and Raouia Briki of POMED’s Tunisia office.

To read this Q&A as a PDF, click here.

POMED: How important are the May 6 municipal elections to Tunisia’s democratic development?
Raouia Briki: The municipal elections present the first opportunity to practice democracy at the sub-national level in Tunisia. Electing municipal councils, which are closer to the public than is the national parliament in Tunis, will enable the Tunisian people to participate more directly in democratic politics by choosing representatives to manage local affairs, such as community development, transportation, and other local services. Tunisians are not seeing the benefits or the fruits of democracy because of political paralysis at the national level, as well as their distance from the locus of decision-making.

By contrast, municipal councils may prove more capable of addressing public demands on local issues, as it will be easier for citizens to hold local elected officials to account. And these elections are one of the first steps in the decentralization process mandated in the new constitution. This process has the potential to help close the gaping regional inequalities that have plagued Tunisian politics since the ouster of Ben Ali. Many newly elected officials represent a new generation of leadership, who can play a vital role in preventing an authoritarian resurgence in Tunisia. The electoral law mandates youth representation on election lists, and 52 percent of candidates are between the ages of 18 and 35. 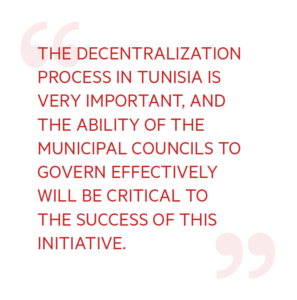 Tammem Mahjoub: The members of the new municipal councils should be more responsive to the public than previous local representatives, who were appointed by the national government between 2011 and 2017, and than those serving during the dictatorship. Many Tunisians are disillusioned about the slow pace of reforms seven years after the revolution, and they do not feel represented by the national government. Some Tunisians have been waiting for the municipal elections, recognizing that they offer a new opportunity to choose representatives and make their voices heard at the community level. The decentralization process in Tunisia is very important, and the ability of the municipal councils to govern effectively will be critical to the success of this initiative.

What are the main things you are watching for during the elections?
Tammem: First, we should be watching the participation rate. There is a high level of mistrust between the rulers and the ruled in Tunisia. Low turnout—below 50 percent—would send a message to the political leadership that Tunisians are losing faith in the government. Only 12 percent of security officers went to the polls on April 29 [Tunisian security personnel, including police and military officers, gained the right to vote with this election, and cast their ballots ahead of the general population], which could presage a low overall turnout when the rest of the country goes to the ballot box on May 6.

Second, the performance of the parties and coalitions could reshape the political map. Ennahda was the only party to field a candidate list in all 350 municipalities, while Nidaa Tounes submitted a list for most—345—of the constituencies. Additionally, there are two electoral coalitions competing in the elections that could prove competitive, the Popular Front (a collection of leftist parties)and the Civil Union (a grouping of progressive parties). The outcome of the election is not only symbolically important, but it could also lead to a cabinet reshuffle prior to the 2019 presidential and parliamentary elections.

Third, it will be interesting to see how much support the independent lists, which are not affiliated with any political party or coalition, attract. A strong performance by these lists would indicate substantial voter discontent with national-level political parties.

Raouia: I will be watching the dynamics between Nidaa Tounes and Ennahda at the local level. The two parties are in a marriage of convenience at the national level, but it is clear that neither likes the other. Some of this tension may be more apparent at the local level and could be exacerbated by personality conflicts.

With the new local authorities law, which discusses the roles and competencies of municipal councils and which parliament finally passed on April 26, what else needs to be done to set up the councils for success? 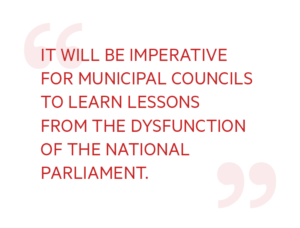 Raouia: Now that the local authorities law has been adopted, citizens will need to be educated on its provisions, so that they understand how municipal councils can address their local needs. Cooperation between the newly elected officials and the permanent council staff (many of whom are holdovers from the Ben Ali regime) will be critical. The new councils will have to learn how to manage their bureaucracies and other entrenched interests. Similarly, the national and local governments must find a way to collaborate. The burden will fall on the national government, which not only should encourage and support the municipal councils but also will need to let go of some of its powers. Finally, the elected local officials will have to work together, which is easier said than done. It will be imperative for municipal councils to learn lessons from the dysfunction of the national parliament.

Tammem: The key will be to keep the people interested in local affairs or, in the event that turnout is low, for the newly elected council members to establish trust with the public in the first place. The municipal officials—both elected office holders and bureaucrats—should receive training in how to perform their duties. Ideally, the national government would fund such training to signal its determination to delegate authority to local governments, as called for in the constitution. The new legal framework for decentralization will be implemented gradually, providing the newly elected councils time to understand the new law, experiment with it, and explain their prerogatives to their constituents. Elected officials will need to strike a careful public balance, pledging to address the grievances of their constituents while managing expectations about how quickly this can be accomplished.