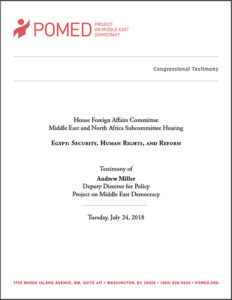 In his testimony, Miller described how Egypt is “no longer as important to U.S. interests as it once was.” He stated, “Egypt has ceased to be a regional power in the Middle East.” Egypt is still of “paramount concern” to the United States, however, because its “ongoing internal deterioration” could create security risks beyond its borders.

Miller also explained that even though “repression is reaching alarming levels as President al-Sisi takes steps that are more characteristic of totalitarian than authoritarian regimes,” Egypt has yet to neutralize the threat posed by terrorist groups such as the Sinai-based Islamic State affiliate. And Miller recommended that in 2019 Fiscal Year appropriations legislation, Congress should 1) retain human rights conditions on Egypt’s military aid and 2) reduce the aid from $1.3 billion to $1 billion annually.

Miller advised, “If military assistance to Egypt is reduced and conditioned, the Trump administration will be in a stronger position to persuade al-Sisi’s government to open up political space, reform its military doctrine, and address the country’s growing radicalization problem.”

Miller testified alongside Michele Dunne of the Carnegie Endowment for International Peace, Jared Genser of the Georgetown University Law Center, and Samuel Tadros of the Hudson Institute.