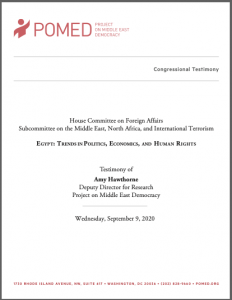 (Washington, D.C.) — On September 9, POMED’s Deputy Director for Research Amy Hawthorne testified in Congress before the U.S. House of Representatives Committee on Foreign Affairs’s Subcommittee on the Middle East, North Africa, and International Terrorism in a hearing titled “Egypt: Trends in Politics, Economics, and Human Rights.”

In her testimony, Hawthorne described how the military-backed dictatorship of President Abdel Fattah al-Sisi is the most repressive in Egypt’s modern history. Despite al-Sisi’s claim that his iron grip is necessary to combat terrorism, “the regime’s ‘security’ measures are more often about stifling dissent, imposing control, and entrenching its power than about protecting citizens,” observed Hawthorne.

In fact, the human rights crisis under al-Sisi is dramatically worse than even the dismal record of Hosni Mubarak, Hawthorne explained. “Several tens of thousands of Egyptians have been arrested on political grounds. Untold thousands are kept in a horrifying network of jails, prisons, and secret detention centers.” Those locked up include politicians, human rights defenders, children, journalists, LGBTQ youth, Christian teenagers, and many others, including American citizens, one of whom, Mustafa Kassem, died in prison in January.

“The United States has important security interests in Egypt, but we cannot look away from the repression and human rights abuses,” argued Hawthorne. “Indeed, we are implicated in them through our financial and diplomatic support. Not only is the situation in Egypt morally abhorrent, it also has directly harmed American citizens.”

Hawthorne urged Congress to set clear red lines with regard to Egypt’s human rights transgressions. “At the same time,” she said, “we should do whatever we can to support those Egyptians who continue to bravely and peacefully struggle for human rights, democratic values, and dignity.”

Hawthorne testified alongside Michele Dunne of the Carnegie Endowment for International Peace, Tamara Cofman Wittes of the Brookings Institution, and Samuel Tadros of the Hudson Institute.