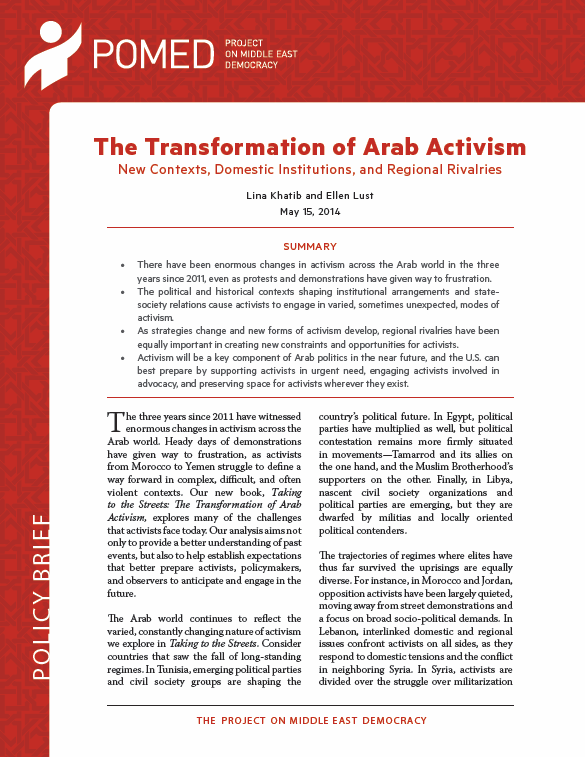 The three years since 2011 have witnessed enormous changes in activism across the Arab world. Heady days of demonstrations have given way to frustration, as activists from Morocco to Yemen struggle to define a way forward in complex, difficult, and often violent contexts. Khatib and Lust’s new book, Taking to the Streets: The Transformation of Arab Activism explores many of the challenges that activists face today. Their analysis aims not only to provide a better understanding of past events, but also to help establish expectations that better prepare activists, policymakers, and observers to anticipate and engage in the future.

From a series of country-specific cases, this policy brief analyzes three trends: the role of institutional structures and regime type in shaping activist behavior, changing contexts and new modes of activism, and the heightened influence of regional actors.

Lina Khatib is the Director of the Carnegie Middle East Center in Beirut. Previously, she was the co-founding head of the Program on Arab Reform and Democracy at Stanford University’s Center on Democracy, Development, and the Rule of Law. Her research interests include the international relations of the Middle East, Islamist groups, political transitions, and foreign policy. She has also published widely on public diplomacy, political communication, and political participation in the Middle East.

Ellen Lust is an Associate Professor in the Department of Political Science at Yale University and a Nonresident Senior Fellow at the Project on Middle East Democracy (POMED). Her books include Structuring Conflict in the Arab World and Political Participation in the Middle East, co-edited with Saloua Zerhouni. Her work broadly examines political participation and governance. Lust has conducted fieldwork, implemented public opinion polls, and led alumni tours across the region, including in Egypt, Jordan, Libya, Morocco, Palestine, Syria, and Tunisia.