For a full text copy of brief, click here. 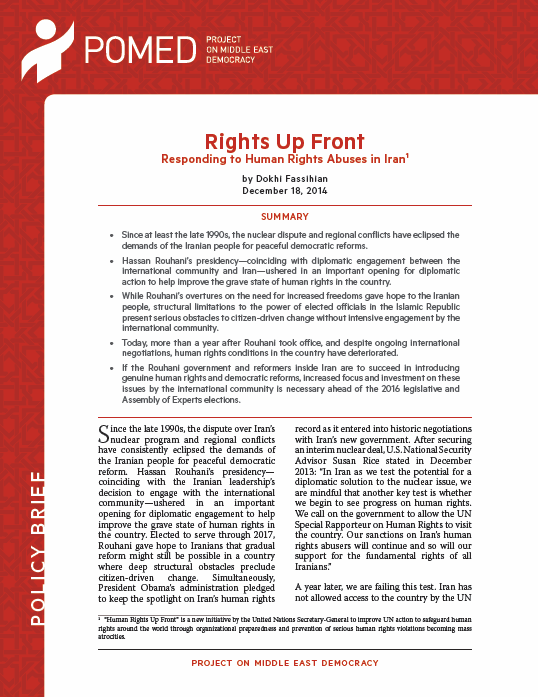 Since the late 1990s, the dispute over Iran’s nuclear program and regional conflicts have consistently eclipsed the demands of the Iranian people for peaceful democratic reform. Hassan Rouhani’s presidency—coinciding with the Iranian leadership’s decision to engage with the international community—ushered in an important opening for diplomatic engagement to help improve the grave state of human rights in the country. Elected to serve through 2017, Rouhani gave hope to Iranians that gradual reform might still be possible in a country where deep structural obstacles preclude citizen-driven change. Simultaneously, President Obama’s administration pledged to keep the spotlight on Iran’s human rights record as it entered into historic negotiations with Iran’s new government. After securing an interim nuclear deal, U.S. National Security Advisor Susan Rice stated in December 2013: “In Iran as we test the potential for a diplomatic solution to the nuclear issue, we are mindful that another key test is whether we begin to see progress on human rights. We call on the government to allow the UN Special Rapporteur on Human Rights to visit the country. Our sanctions on Iran’s human rights abusers will continue and so will our support for the fundamental rights of all Iranians.”

A year later, we are failing this test. Iran has not allowed access to the country by the UN Special Rapporteur, appointed in 2011, and has failed to allow access to seven thematic UN human rights experts since 2003. According to multiple human rights organizations working to document rights abuses inside Iran, politically motivated arrests have significantly increased since Rouhani took office. At least 900 political prisoners remain in detention, including opposition candidates from the 2009 presidential elections. Executions have risen dramatically: 700 individuals were executed in 2013, and 674 have been executed in 2014. Forty to fifty percent of these executions are carried out in secret, and they continue to include juvenile and public executions. Discrimination and violence against women have also worsened with new laws adopted to curtail education, employment, and personal freedoms.

1. The U.S. government and the EU should reshape their bilateral and multilateral approach to Iran to elevate human rights goals on par with other objectives. Existing human rights mechanisms and measures should not be compromised in return for progress on the nuclear or broader national security agenda with respect to Iran.

2. As the main sponsors of the resolution on Iran at the UN Human Rights Council, the U.S., Sweden, and EU should work with other members to strengthen attention to the situation in Iran. In March 2015, the Human Rights Council should adopt a resolution that outlines areas of ongoing human rights violations in the country, and sets specific benchmarks for progress.

3. The UN Secretary General should appoint a special envoy to travel to Iran and engage in diplomatic efforts to induce Iran’s genuine cooperation with the UN human rights bodies and mechanisms, starting with access to the country by the UN Special Rapporteur on the situation of human rights in Iran.

4. The UN Human Rights Council, UN General Assembly, and UN Secretary General should press for free and fair elections for the Parliament and Assembly of Experts in 2016, including objective criteria for candidates and international observation. The Iranian government should be urged to partner with the UNOPS/OSCE/UNDP to provide assistance to improve the electoral process to meet international standards, including electoral observation missions.

5. The U.S. government and EU should continue to designate persons and entities responsible for human rights violations against the Iranian people, including high level officials. Existing visa bans on sanctioned persons should be strictly enforced, particularly by EU states, while sanctions should not be reversed until verifiable progress on specific and measurable benchmarks are met. In particular, the Islamic Republic of Iran Broadcasting (IRIB) should be re-designated as a sanctioned entity given its role in ongoing human rights violations.

Dokhi Fassihian has led three nongovernmental organizations in the area of human rights and democracy, multilateral affairs, and Iranian affairs since 2003. At the Democracy Coalition Project, Ms. Fassihian led multilateral strategies to promote democracy and human rights around the world. Ms. Fassihian led an international campaign that led to the establishment of the UN Human Rights Council’s first country special rapporteur on Iran in 2011. She has also served as a co-director at United for Iran and as the executive director of the National Iranian American Council. Ms. Fassihian  holds a M.A. in Advanced International Studies from the Paul H. Nitze School of Advanced International Studies and has served on the boards of the Democracy Coalition Project, the International Campaign for Human Rights in Iran, United for Iran, and the National Iranian American Council.