Policy Brief – “Pushing Back” on Egypt: Why Sisi’s Abuse of Press Freedom Must Draw a Stronger Response 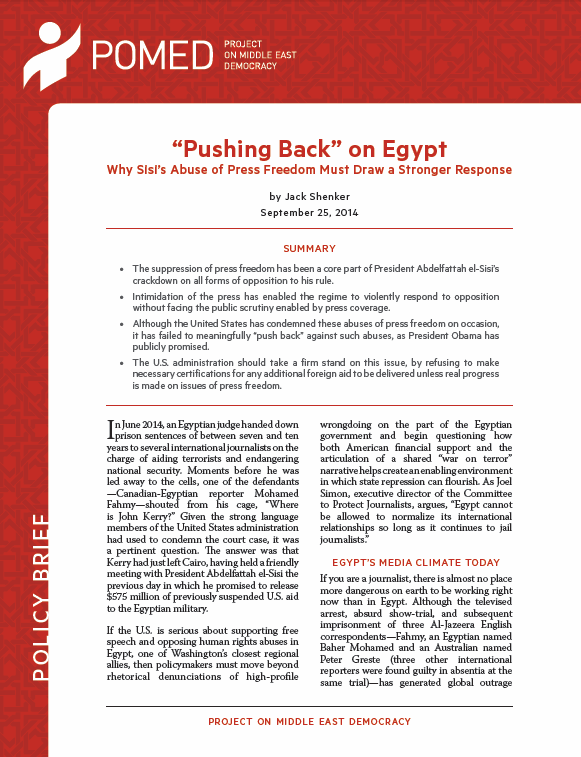 In June 2014, an Egyptian judge handed down prison sentences of between seven and ten years to several international journalists on the charge of aiding terrorists and endangering national security. Moments before he was led away to the cells, one of the defendants – Canadian-Egyptian reporter Mohamed Fahmy – shouted from his cage, “Where is John Kerry?” Given the strong language members of the United States administration had used to condemn the court case, it was a pertinent question. The answer was that Kerry had just left Cairo, having held a friendly meeting with President Abdelfattah el-Sisi the previous day in which he promised to release $575 million of previously suspended U.S. aid to the Egyptian military.

If the U.S. is serious about supporting free speech and opposing human rights abuses in Egypt, one of Washington’s closest regional allies, then policymakers must move beyond rhetorical denunciations of high-profile wrongdoing on the part of the Egyptian government and begin questioning how both American financial support and the articulation of a shared ‘war on terror’ narrative helps create an enabling environment in which state repression can flourish. As Joel Simon, executive director of the Committee to Protect Journalists, argues, “Egypt cannot be allowed to normalize its international relationships so long as it continues to jail journalists.”

Jack Shenker is an award-winning journalist based in Cairo and London. For several years he was Egypt correspondent for the British Guardian newspaper, covering the final stages of the Mubarak regime and the country’s subsequent revolutionary unrest. He has also reported from across the globe, producing stories on Gaza, South Africa, Central Asia and the Indian Subcontinent; in 2012, his exposé on the deaths of African migrants in the Mediterranean was awarded “News Story of the Year” at the One World Media Awards. His first book, exploring the politics of resistance in Egypt, will be published by Penguin and Allen Lane next year.