Policy Brief – Counterinsurgency Requires More than Guns: Refocusing on the Political Strategy to Defeat IS in Iraq 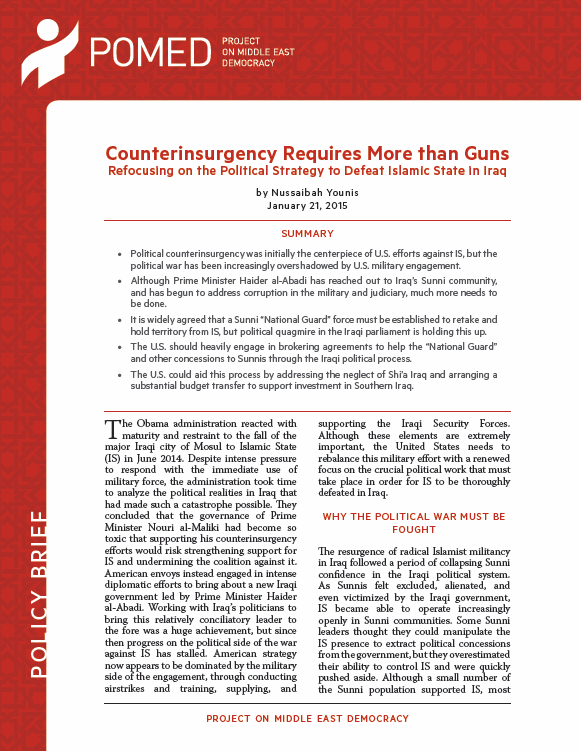 The Obama administration reacted with maturity and restraint to the fall of the major Iraqi city of Mosul to Islamic State (IS) in June 2014. Despite intense pressure to respond with the immediate use of military force, the administration took time to analyze the political realities in Iraq that had made such a catastrophe possible. They concluded that the governance of Prime Minister Nouri al-Maliki had become so toxic that supporting his counterinsurgency efforts would risk strengthening support for IS and undermining the coalition against it. American envoys instead engaged in intense diplomatic efforts to bring about a new Iraqi government led by Prime Minister Haider al-Abadi. Working with Iraq’s politicians to bring this relatively conciliatory leader to the fore was a huge achievement, but since then progress on the political side of the war against IS has stalled. American strategy now appears to be dominated by the military side of the engagement, through conducting airstrikes and training, supplying, and supporting the Iraqi Security Forces. Although these elements are extremely important, the United States needs to rebalance this military effort with a renewed focus on the crucial political work that must take place in order for IS to be thoroughly defeated in Iraq.

1. Remember that politics defeats insurgencies, not military force alone. When the U.S. focuses on political goals with urgency and clarity of vision, it can achieve a great deal. It is critical that the U.S. prevents its military engagement in the war against IS from overshadowing the political strategy that must be implemented in order for IS to be fatally undermined in the country. The political war against IS must once again become the centerpiece of the U.S. strategy, and there should be a rebalancing of the distribution of attention and of resources accordingly.

2. Engage in Iraqi politics to win concessions for Sunnis. Envoys from the United States should help to broker agreements between Iraqi politicians so that the Iraqi government can make progress in its plans to grant major concessions to Iraq’s Sunni community. It is critical that a National Guard be created that recognizes, funds, and protects the growing army of anti-IS Sunni fighters. Sunnis must also be offered a future in Iraq in which they will be locally autonomous, with their own police and section of the security forces, and with a fair proportion of Iraq’s wealth channeled to them. De-Ba’athification legislation that prevents Sunnis from fair access to government jobs must also be revoked, and stays of execution should be issued to Sunni political figures who have been convicted in specious judicial proceedings.

3. Enable the cash-strapped Iraqi government to invest in Shi’a Iraq. After years of horrific violence directed against it, Iraq’s Shi’a population is not going to allow its political representatives to make significant concessions to Iraq’s Sunnis unless they are reassured that their needs are also a top priority for the government. At a time when oil prices are falling and the country is already headed into deficit, the temptation is for the country to usher in a period of fiscal conservatism. Failing to invest in the political counterinsurgency will simply lead to many more years of spending on expensive military engagements. The United States should give the Iraqi government direct budget support to invest in infrastructure and social services in Southern Iraq. In return, political representatives from the South should be expected to approve Iraqi government measures to address Sunni grievances. Resources for this endeavor could be sought from the $2.1 billion Economic Support Fund included under the Overseas Contingency Operations title in FY15. Most of that $2.1 billion is designated for Afghanistan, Pakistan, Syria and Somalia, but the remaining $475 million is undesignated and a portion of that could be allocated to spending on Southern Iraq. By investing comparatively little in pushing through progress in the political war against IS today, the United States has the opportunity to forestall a much more costly long-term military engagement with IS in the years to come.

Nussaibah Younis is POMED’s Senior Research Associate. She is an expert on current Iraqi politics and is preparing a book on Iraqi foreign policy for publication. Prior to joining POMED, Nussaibah served as an International Security Program Research Fellow at the Belfer Center for Science and International Affairs at the Harvard Kennedy School. She has a PhD in the International Relations of the Middle East and an MSc in Arab World Studies from the University of Durham, UK, and she holds a BA from the University of Oxford. 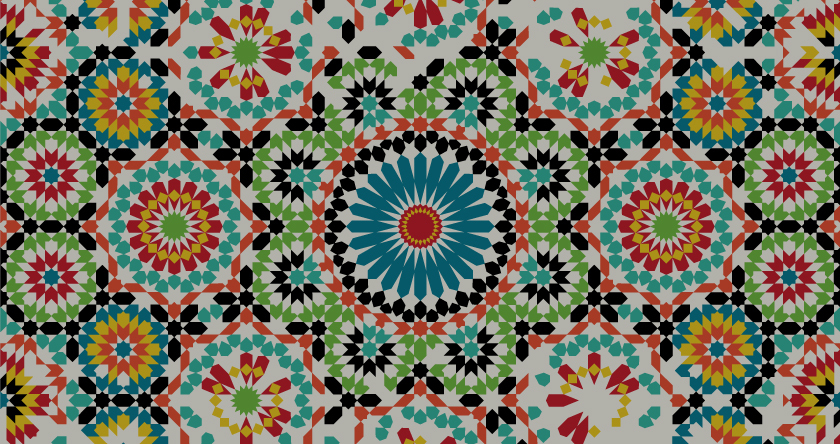