Policy Brief – An Excluded Population: A Nuanced Approach to Sinai’s Bedouin is Necessary to Secure the Region 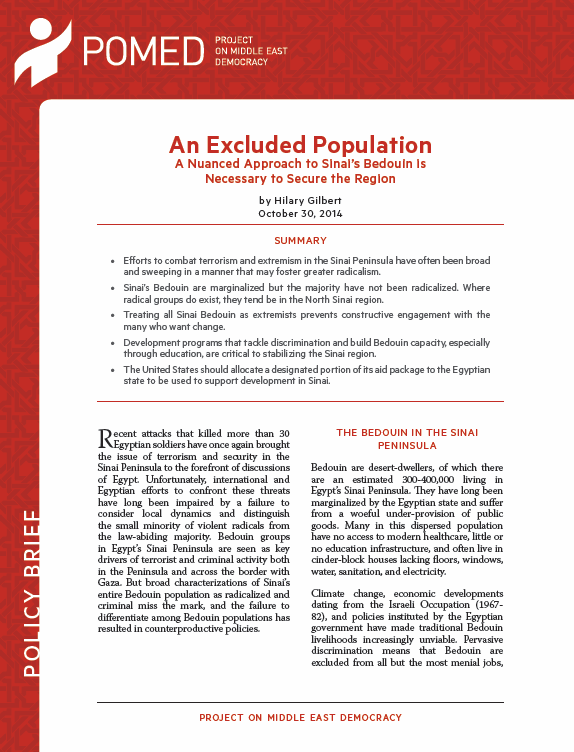 Recent attacks that killed more than 30 Egyptian soldiers have once again brought the issue of terrorism and security in the Sinai Peninsula to the forefront of discussions of Egypt. Unfortunately, international and Egyptian efforts to confront these threats have long been impaired by a failure to consider local dynamics and distinguish the small minority of violent radicals from the law-abiding majority. Bedouin groups in Egypt’s Sinai Peninsula are seen as key drivers of terrorist and criminal activity both in the Peninsula and across the border with Gaza. But broad characterizations of Sinai’s entire Bedouin population as radicalized and criminal miss the mark, and the failure to differentiate among Bedouin populations has resulted in counterproductive policies.

Hilary Gilbert is the founder and Chair of the Community Foundation for South Sinai and is a Research Fellow at the University of Nottingham, UK. She is one of few scholars to document the marginalized position of the Bedouin in modern Sinai. Her research, facilitated by local Bedouin colleagues, draws on intimate local knowledge and informs the work of the South Sinai Community Foundation. Led by Bedouin and working within Bedouin cultural norms, the Community Foundation integrates research and practice and has become a vehicle for Bedouin development and civic engagement. Gilbert divides her time between homes in England and in Saint Katherine, South Sinai.