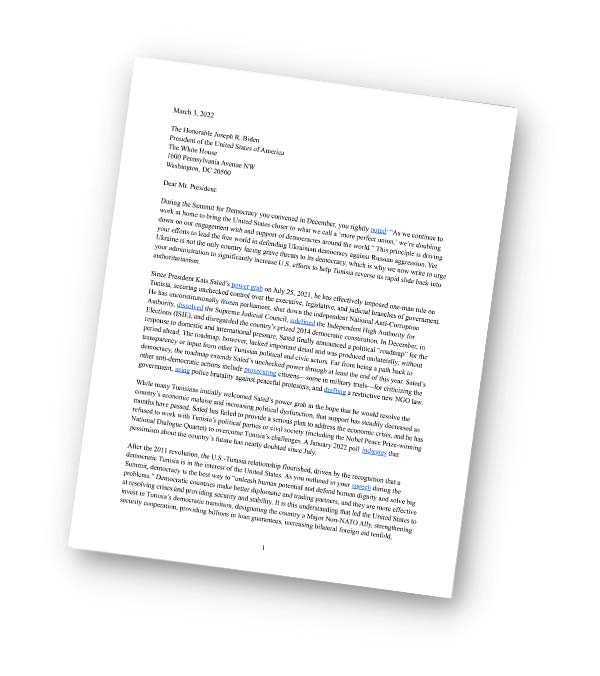 Read this letter as a PDF.

During the Summit for Democracy you convened in December, you rightly noted: “As we continue to work at home to bring the United States closer to what we call a ‘more perfect union,’ we’re doubling down on our engagement with and support of democracies around the world.” This principle is driving your efforts to lead the free world in defending Ukrainian democracy against Russian aggression. Yet Ukraine is not the only country facing grave threats to its democracy, which is why we now write to urge your administration to significantly increase U.S. efforts to help Tunisia reverse its rapid slide back into authoritarianism.

Since President Kaïs Saïed’s power grab on July 25, 2021, he has effectively imposed one-man rule on Tunisia, securing unchecked control over the executive, legislative, and judicial branches of government. He has unconstitutionally frozen parliament, shut down the independent National Anti-Corruption Authority, dissolved the Supreme Judicial Council, sidelined the Independent High Authority for Elections (ISIE), and disregarded the country’s prized 2014 democratic constitution. In December, in response to domestic and international pressure, Saïed finally announced a political “roadmap” for the period ahead. The roadmap, however, lacked important detail and was produced unilaterally, without transparency or input from other Tunisian political and civic actors. Far from being a path back to democracy, the roadmap extends Saïed’s unchecked power through at least the end of this year. Saïed’s other anti-democratic actions include prosecuting citizens—some in military trials—for criticizing the government, using police brutality against peaceful protesters, and drafting a restrictive new NGO law. ​​

While many Tunisians initially welcomed Saïed’s power grab in the hope that he would resolve the country’s economic malaise and increasing political dysfunction, that support has steadily decreased as months have passed. Saïed has failed to provide a serious plan to address the economic crisis, and he has refused to work with Tunisia’s political parties or civil society (including the Nobel Peace Prize-winning National Dialogue Quartet) to overcome Tunisia’s challenges. A January 2022 poll indicates that pessimism about the country’s future has nearly doubled since July.

After the 2011 revolution, the U.S.-Tunisia relationship flourished, driven by the recognition that a democratic Tunisia is in the interest of the United States. As you outlined in your speech during the Summit, democracy is the best way to “unleash human potential and defend human dignity and solve big problems.” Democratic countries make better diplomatic and trading partners, and they are more effective at resolving crises and providing security and stability. It is this understanding that led the United States to invest in Tunisia’s democratic transition, designating the country a Major Non-NATO Ally, strengthening security cooperation, providing billions in loan guarantees, increasing bilateral foreign aid tenfold, supporting Tunisian and U.S.-based NGOs, and growing bilateral trade over the past decade, including a 45 percent increase in foreign direct investment from the United States. Saïed’s reversal of Tunisia’s hard-won democratic gains threatens the foundations of the strong post-2011 U.S.-Tunisia relationship. They also pose serious risks to Tunisia’s stability, as Tunisia’s democratic transition had helped it become an important bulwark against terrorism and insecurity in North Africa.

Unfortunately, we fear that the absence of a strong U.S. reaction to Saïed’s assault on democracy may have encouraged him to press forward on his destructive path. We now urge your administration, in this Year of Action on democracy, to press President Saïed to take concrete steps to return Tunisia to democratic governance. As an incentive, we recommend that your administration back additional economic support for Tunisia only upon the completion of those steps. They should include the quick return of a freely elected legislative body; the reinstatement and empowerment of independent bodies including the Supreme Judicial Council and the National Anti-Corruption Authority; and the protection of political pluralism and freedom of association, speech, and the media. This conditionality should apply to all forms of additional assistance, including new bilateral aid and loan guarantees, the Millennium Challenge Corporation compact, and support for loans from international financial institutions.

Such an approach of offering incentives for progress—particularly if done in close coordination with other democratic allies and international financial institutions—would demonstrate support for the Tunisian people while encouraging urgently needed moves to protect democracy. We also encourage your administration to work with Congress to condition U.S. security assistance on the Tunisian government’s ending trials of civilians in military courts and ensuring full accountability for instances of police brutality. Saving Tunisia’s democracy is ultimately up to Tunisians, but the United States should do whatever it can to help, both to protect U.S. interests and to uphold democratic values.

* Institutional affiliations are provided for the purpose of identification only.