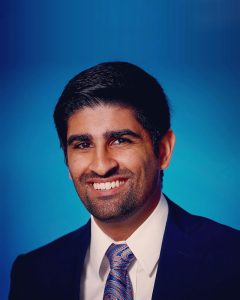 Among the many factors that led to Tunisian President Kaïs Saïed’s power grab on July 25 was the COVID-19 pandemic. In this piece, I describe precisely how the pandemic has shaped the power grab, making two primary points: 1) COVID-19 exacerbated the economic and political crisis that then facilitated Kaïs Saïed’s actions, and 2) Saïed’s relatively more effective response to COVID-19 in the past couple of weeks has helped legitimate his takeover of the government.

Tunisia handled the first wave of the pandemic relatively well, considerably better than its peers. But it has been hit hard since, particularly by the Delta variant, which caused a massive spike in cases in July 2021, immediately preceding Saïed’s July 25 takeover. 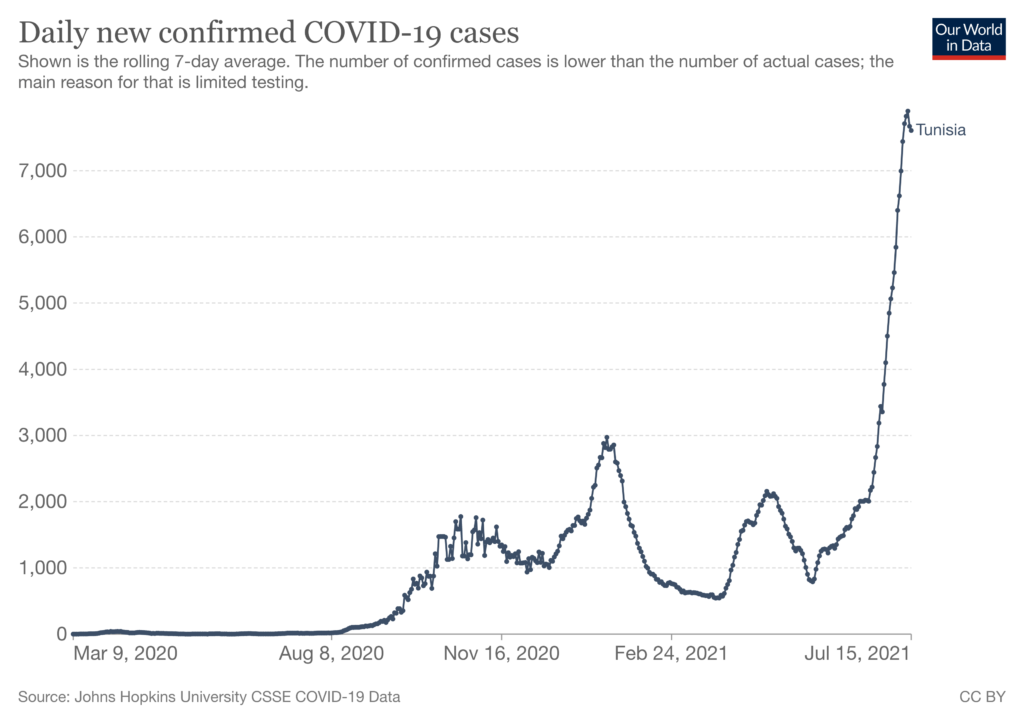 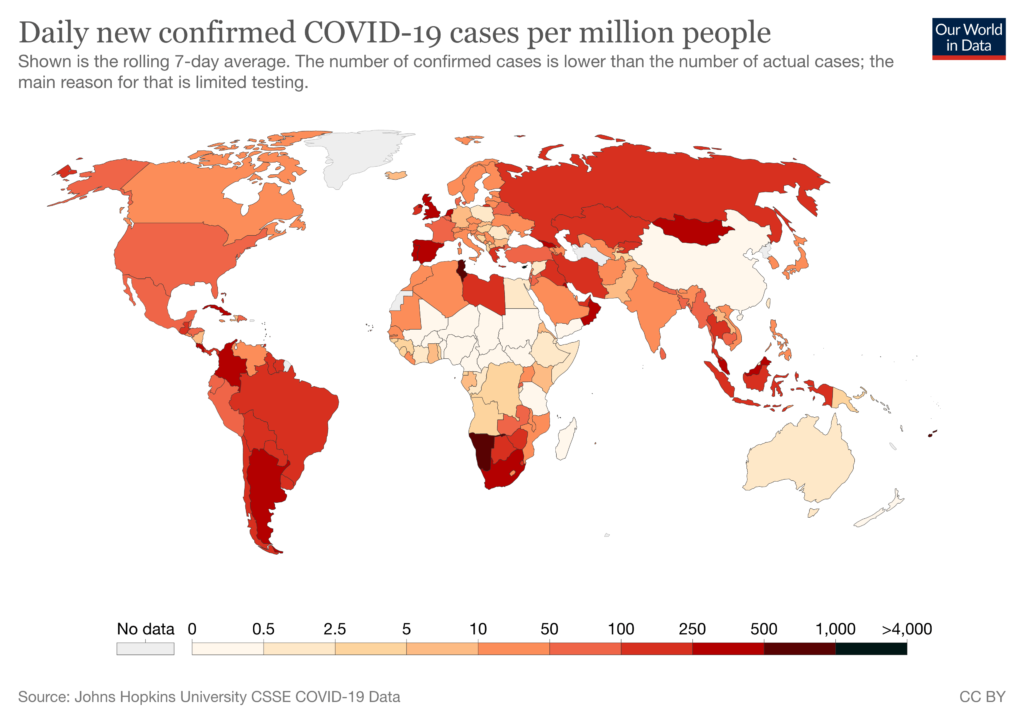 This spike in cases overwhelmed Tunisia’s health care system. “We are in a catastrophic situation,” warned Ministry of Health spokesperson Nissaf Ben Alaya on July 8. “The health system collapsed. We are struggling to provide oxygen…doctors are suffering from unprecedented fatigue…the boat is sinking.”

Even prior to this spike, the pandemic was wreaking havoc on Tunisia’s economy. Since 2020, tourism had all but stopped, businesses had closed, and there was not a sufficient safety net in place to help people make ends meet. Meanwhile, the government took on more debt and was nearing a “Greek scenario” of a complete default, in the words of journalist Haythem El Mekki. Real GDP contracted by 8.8 percent in 2020 and shrank by another 3 percent in the first quarter of 2021. According to polls by Emrhod Consulting, the percentage of Tunisians who said that the economy is getting worse nearly doubled from 44 percent in January 2020, prior to the pandemic, to 85 percent in January 2021. By July 2021, the economic crisis had reached a fever pitch, with inflation topping 6.4 percent.

“I cannot live anymore,” noted one protester who turned out for angry demonstrations on July 25, hours before Saïed’s announcement that he was invoking exceptional powers and freezing the parliament. “I feel like crying as I am talking to you. I went out because I am fed up. We’re hungry.”

The health and economic crises in turn had major political repercussions, first and foremost by delegitimizing the government of former Prime Minister Hichem Mechichi. Beyond that, the pandemic also helped to delegitimize the semi-presidential system that Tunisia had set up through the 2014 constitution. Wary of a powerful presidency that might revert to dictatorship, Tunisians after the 2011 revolution opted for a system in which a president would share power with a prime minister whose authority derived from the parliament. This divided system, however, was producing an incoherent response to the pandemic, with the president and prime minister struggling over power and failing to agree on a common strategy.

On April 9, 2021, for instance, Prime Minister Mechichi, seeing the rise in cases, attempted to move the curfew earlier, from 10pm to 7pm. But President Saïed overruled him, arguing, “There is a scientific side. But there is also a social and economic side . . . the nighttime curfew should be reviewed.”

More serious was the attempted national vaccination day on July 20, which served as the spark for Kaïs Saïed’s power grab. Announced just one day before, the mass health event turned into a major disaster, with Tunisians waiting in huge lines in the hot sun only to be turned away due to vaccine shortages. Clashes even broke out as people competed for the limited supply. Prime Minister Mechichi claimed he was not even informed of the event and fired Health Minister Faouzi Mehdi. Kaïs Saïed instead praised Mehdi, before tasking the army with leading the COVID-19 response.

The incoherent approach resulting from the semi-presidential system in turn led protesters to call for a stronger presidency that could respond more effectively. “The conflict between the two heads of the executive branch of the country will lead us into the abyss,” observed Khalifa al-Harbawi, a civil servant. Fueled in part by the health and economic crises, protesters on July 25 demanded the dissolution of the parliament and the dismissal of the prime minister. “They stole from us,” one protester said, referring to the members of parliament. “There isn’t even enough oxygen to help the sick people. It was they who brought on this sickness of the country.”

Saïed, of course, complied with the protesters’ demands. Leveraging the vaccine day catastrophe, Saïed struck on July 25, sacking Mechichi, freezing the parliament, and lifting MPs’ immunity. As of August 22, Saïed has yet to appoint a new prime minister or announce a roadmap, and has instead been ruling by decree.

Since Saïed’s takeover, Tunisia’s COVID-19 response has undoubtedly improved. Tunisia held two considerably more successful vaccination days on August 8 and 15, vaccinating 551,008 people over 40 years old on the first then another 594,141 aged 18-39 on the second. As a result, since July 25, the share of the population who has received one dose has doubled from about 15 percent to 30 percent. The number of COVID-19 cases has also dropped rapidly. Saïed in turn relaxed COVID-19 curfew restrictions and increased assistance to low-income families. 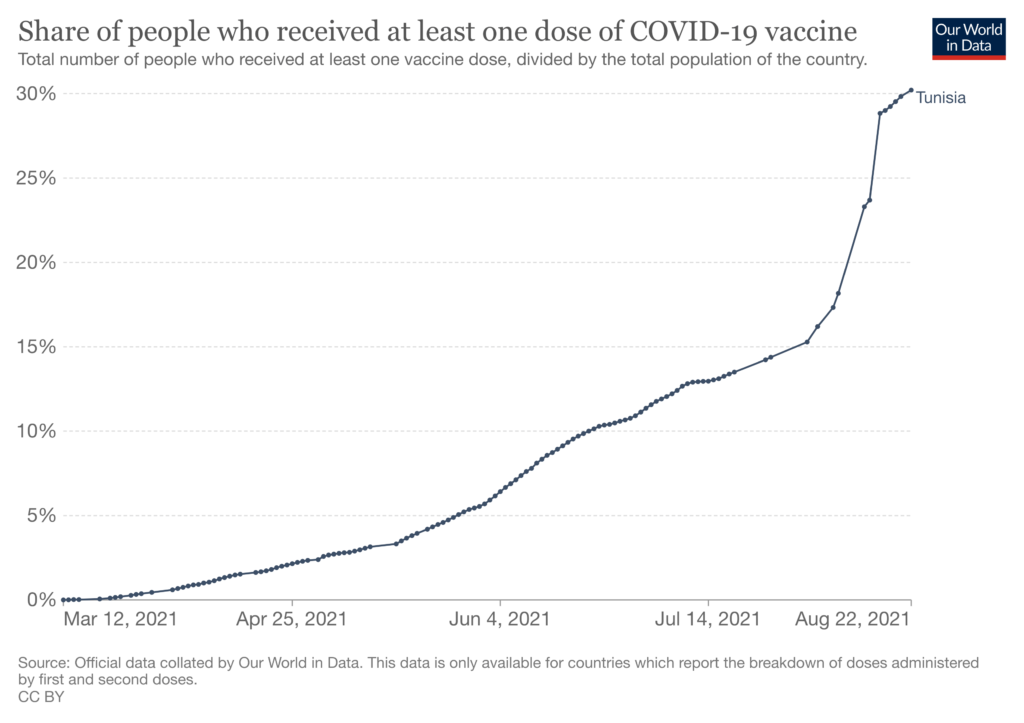 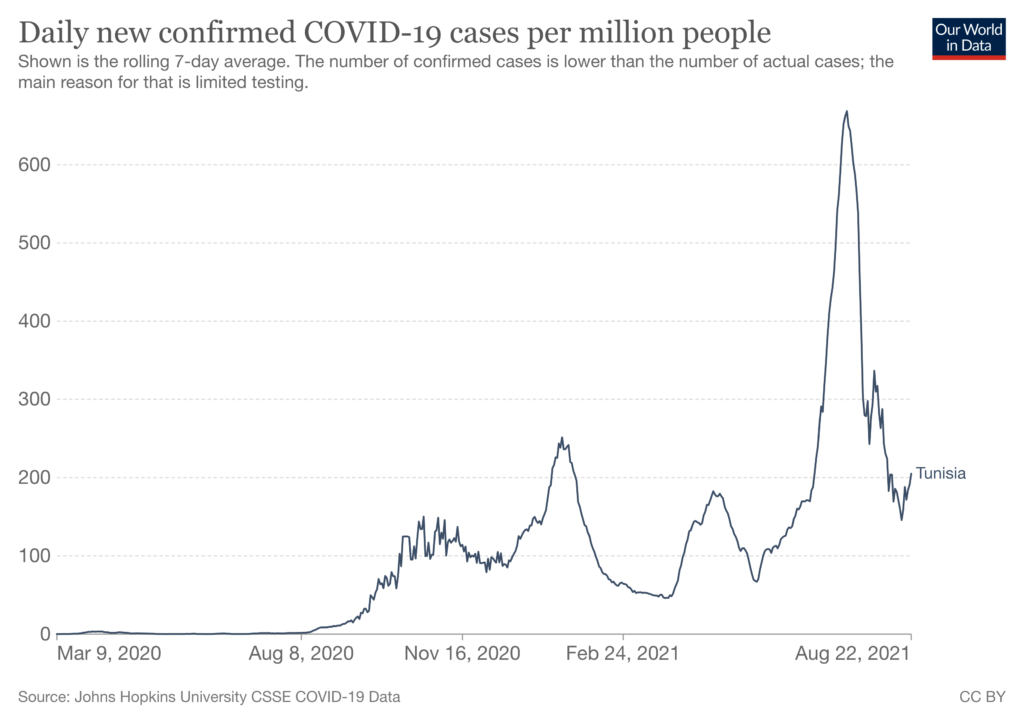 There are many possible reasons for this improved response under Saïed. Part of it may be the move towards a streamlined, presidential system. Part of it also could be his tasking of the military to lead the response, including the director general of military health, General Mustapha Ferjani, and the new health minister, Colonel Major Ali Mrabet. There has also likely been some bureaucratic learning from the previous failures.

But perhaps the most important reason has been foreign support. In what some view as an attempt to “vie for influence” over Saïed, Tunisia has received a flood of medical supplies and vaccines from foreign powers in recent weeks. The United States sent one million liters of oxygen on July 26, and then one million Moderna vaccines on August 1. Italy followed suit, sending medical supplies on July 27 and then 1.5 million vaccines on August 1. China sent 400,000 Sinovac vaccines on August 2. The UAE sent oxygen and other supplies on August 3, and Egypt did the same on August 9. Already by August 2, Saïed said Tunisia had received six million total vaccines from “friendly countries.”[1]

Regardless of the reason, Kaïs Saïed appears to be getting the credit for the improved pandemic situation. “We feel a huge difference compared to how the Mechichi government handled the vaccine campaign,” noted analyst Henda Fella. Saïed has accordingly been soaring high in the polls. A July 26-28 survey by Emrhod Consulting claimed that 87 percent of respondents supported Saïed’s actions on July 25, while a later August 4-13 poll by Sigma Conseil found this figure had increased to 94 percent. While both figures should be taken with a grain of salt—there is likely considerable social pressure right now to say yes to pollsters, and even fear of punishment for saying no—it is likely that a majority of Tunisians are supportive of Saïed and in particular his more effective response to COVID-19. In that sense, COVID-19 has both contributed to and now helped legitimate Kaïs Saïed’s power grab.

Sharan Grewal is an assistant professor of government at the College of William & Mary, a nonresident senior fellow at POMED, and a nonresident fellow at the Brookings Institution. He is on Twitter @sh_grewal.