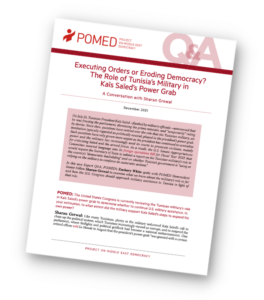 On July 25, Tunisian President Kaïs Saïed—flanked by military officials—announced that he was freezing the parliament, dismissing the prime minister, and “temporarily” ruling by decree. Since then, questions have swirled over the role that the Tunisian military, an institution typically regarded as politically neutral, played in the president’s power grab. Such questions have only grown more urgent as the president has continued to centralize power and the military has increasingly used its courts to prosecute civilians, mainly for criticizing Saïed and the armed forces. As a result, the U.S. Senate Appropriations Committee inserted language into its foreign operations bill for Fiscal Year 2022 that would require the Secretary of State to submit a report on the Tunisian military’s role in the country’s “democratic backsliding” and on whether Tunisia’s government is “using or relying on the military to reinforce its autocratic actions.”

In this new Expert Q&A, POMED’s Zachary White spoke with POMED Nonresident Senior Fellow Sharan Grewal to examine what we know about the military’s role so far and how the U.S. Congress should approach military assistance to Tunisia in light of that role.

POMED: The United States Congress is currently reviewing the Tunisian military’s role in Kaïs Saïed’s power grab to determine whether to continue U.S. military assistance. In your estimation, to what extent did the military support Kaïs Saïed’s steps to expand his own power?

Sharan Grewal: Like many Tunisians, plenty in the military welcomed Kaïs Saïed’s call to clean up the political system, which Tunisians increasingly viewed as corrupt, and to suspend the parliament, where fistfights and political gridlock had become a national embarrassment. One retired officer told Le Monde in August that the president’s power grab “was greeted with a certain relief” among the troops. Another told me that “like the majority of the Tunisian people, the military were not comfortable with the chaotic situation in the country before July 25.”[1]

Indeed, in my own conversations with retired officers over the past two years, I have been struck by how many perceived the political class as corrupt. “I have no confidence in them because they only want power and money,” one told me.[2] “The political class after the revolution has been really down, low quality,” said another. “Everyone now can become a deputy or minister, people who never went to school; we come across [politicians] who can’t even write a paragraph.”[3]

A third retired officer—who even ran (unsuccessfully) for parliament in 2019—told me that he witnessed corruption and vote-buying during the electoral campaign, and he claimed that “many smugglers” were elected as lawmakers.[4] It would not be surprising if the initial level of support in the military for Kaïs Saïed’s actions mirrored that of the general public.[5] As in the general public, however, support for Saïed’s political takeover among the military appears to have dwindled since July 25. The retired officer quoted above in Le Monde had already observed in August that “​​concern is settling in some, because of the concentration of powers.”

What role did the military play in the power grab?

The military has played two major roles in the power grab. The first was to obey the president’s order to close down the parliament. The military agreed to deploy outside the parliament building in central Tunis on July 25 and prevented Speaker of the Parliament Rached Ghannouchi from entering the facility that night. In the opinion of at least some retired officers, these actions simply reflect the military following orders, not necessarily intervening in politics. As retired Colonel-Major Mokhtar Ben Nasr told the Telegraph, the military “must execute [the president’s] orders, while remaining neutral.”

If the military’s behavior during the 2011 revolution or the 2017 El Kamour protests are any indication, it is unlikely to resort to force when engaging protesters. If it did, that would be clear grounds for suspending U.S. military assistance, and the United States should make clear to the Tunisian military that that would indeed be a red line.

The second role that the military has played during the power grab has been to use military courts to try civilians—including members of parliament (MPs), whose immunity Saïed lifted on July 25. Since then, at least 10 civilians have been investigated or prosecuted in military courts, mostly for freedom of expression charges such as “insulting the president” or “spreading false news about the military.” On November 17, for instance, a military court sentenced MP Maher Zid to three years in prison for insinuating that former Minister of Defense Ghazi Jribi profited from corruption when acquiring U.S.-made helicopters for the army. More well known is the case of MP Yassine Ayari, convicted of “insulting” the army in a 2018 Facebook post and now on trial again for calling Saïed’s power grab a “military coup.”

It is troubling that such speech would be treated as a crime at all, let alone prosecuted in military courts. Despite the reforms that these courts underwent in 2011, they are not independent, with the judges instead appointed by the president and their pay and promotion dependent on the minister of defense. Military courts also lack transparency, with defendants’ access to information often limited for ostensible national security-related reasons. Military trials are a means of quick retributive justice rather than a fair process that all parties will view as impartial. As early as 1998, the UN Special Rapporteur on the independence of judges and lawyers observed that “in regard to the use of military tribunals to try civilians, international law is developing a consensus as to the need to restrict drastically, or even prohibit that practice.” By 2003, the African Commission on Human and Peoples’ Rights stated unequivocally that “military courts should not in any circumstances whatsoever have jurisdiction over civilians.”

Given the roles that the military has played following Saïed’s power grab, what would you advise regarding U.S. military assistance?

Congress should make military assistance to Tunisia conditional upon Tunisia ending military trials of civilians. Tunisia should follow France in dissolving the military justice system entirely or at least should amend the 1957 Code of Military Justice to exclude civilians from it. The 2014 constitution, after all, mandates that military courts are only “competent to deal with military crimes.”

Some might object that conditioning military aid now is hypocritical, given that military trials of civilians occurred prior to July 25 as well. Trust me, I know, having written about this issue on multiple occasions. It’s certainly right to blame the now-suspended parliament for not making it a priority to end this practice. But that failure in no way justifies the use of military trials today; they are as abhorrent now as they were then. Moreover, there has been a clear escalation in military trials of civilians post-July 25, and even more important, there is a heightened risk today that these military trials will help consolidate dictatorship. It is about time the United States put pressure on Tunisia to end them.

In addition, I would advise the U.S. government to make clear to President Saïed and the Tunisian military that any use of military force against peaceful protests would lead to a suspension of military aid. That signal needs to be sent loud and clear to deter any repression moving forward.

Sharan Grewal, a nonresident senior fellow with POMED, is an Assistant Professor of Government at the College of William & Mary and a nonresident fellow at the Brookings Institution. He received a PhD in Politics from Princeton University in 2018. His research examines democratization, security studies, and political Islam in the Arab world, especially Egypt, Tunisia, and Algeria. Sharan’s work has been published in top academic journals like the American Political Science Review and the American Journal of Political Science, as well as policy outlets like Foreign Policy, Washington Post, Brookings Institution, and Carnegie Endowment for International Peace. Sharan has been interviewed by a number of media outlets, including the New York Times, Wall Street Journal, AFP, and Reuters, among others. He is on Twitter @sh_grewal.

Zachary White is POMED’s Editorial Associate and the editor of POMED’s twice-weekly Tunisia Update newsletter. Prior to joining POMED, Zachary worked on global security issues at The Soufan Center and edited Janine di Giovanni’s new book, The Vanishing: Faith, Loss, and the Twilight of Christianity in the Land of the Prophets. He also participated in the Fulbright Program in Turkey and the Peace Corps in Georgia. Zachary holds a Master’s in Global Affairs from Yale University and a Bachelor of Arts in History and Middle Eastern Studies from Rutgers University.

5. Initial surveys by Emrhod Consulting (conducted July 26-28) and Sigma Conseil (August 4-13) put support for Saïed’s actions at 87 percent and 94 percent, respectively. Emrhod later (September 29-October 1) found that 69 percent supported Saïed’s September 2021 Decree 117, in which he suspended most of the constitution. Each of these figures, however, is likely inflated, in part due to fear that criticizing Saïed could land oneself in front of a military court. There may also be biases in these particular firms’ sampling procedures: A Zogby poll (August 15-September 5), for instance, found that only 49 percent supported the actions taken by Saïed on July 25.