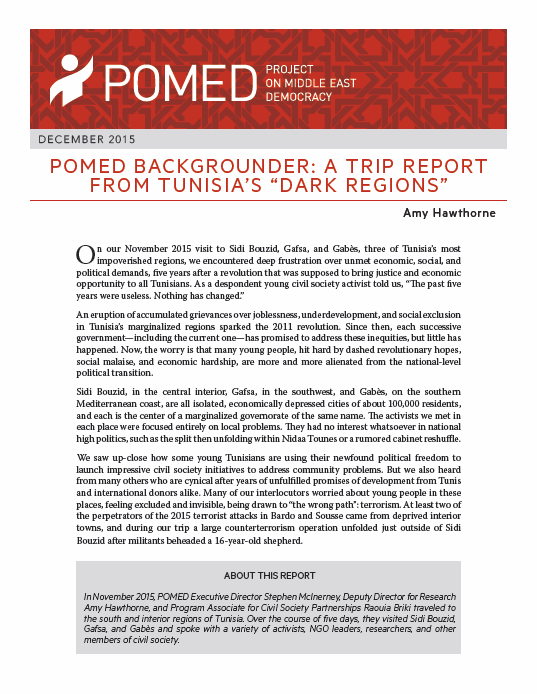 In November 2015, POMED Executive Director Stephen McInerney, Deputy Director for Research Amy Hawthorne, and Program Associate for Civil Society Partnerships Raouia Briki traveled to the south and interior regions of Tunisia. Over the course of five days, they visited Sidi Bouzid, Gafsa, and Gabès and spoke with a variety of activists, NGO leaders, researchers, and other members of civil society.

On our November 2015 visit to Sidi Bouzid, Gafsa, and Gabès, three of Tunisia’s most impoverished regions, we encountered deep frustration over unmet economic, social, and political demands, five years after a revolution that was supposed to bring justice and economic opportunity to all Tunisians. As a despondent young civil society activist told us, “The past five years were useless. Nothing has changed.”

An eruption of accumulated grievances over joblessness, underdevelopment, and social exclusion in Tunisia’s marginalized regions sparked the 2011 revolution. Since then, each successive government—including the current one—has promised to address these inequities, but little has happened. Now, the worry is that many young people, hit hard by dashed revolutionary hopes, social malaise, and economic hardship, are more and more alienated from the national-level political transition.

Sidi Bouzid, in the central interior, Gafsa, in the southwest, and Gabès, on the southern Mediterranean coast, are all isolated, economically depressed cities of about 100,000 residents, and each is the center of a marginalized governorate of the same name. The activists we met in each place were focused entirely on local problems. They had no interest whatsoever in national high politics, such as the split then unfolding within Nidaa Tounes or a rumored cabinet reshuffle.

We saw up-close how some young Tunisians are using their newfound political freedom to launch impressive civil society initiatives to address community problems. But we also heard from many others who are cynical after years of unfulfilled promises of development from Tunis and international donors alike. Many of our interlocutors worried about young people in these places, feeling excluded and invisible, being drawn to “the wrong path”: terrorism. At least two of the perpetrators of the 2015 terrorist attacks in Bardo and Sousse came from deprived interior towns, and during our trip a large counterterrorism operation unfolded just outside of Sidi Bouzid after militants beheaded a 16-year-old shepherd.

Amy Hawthorne is POMED’s Deputy Director for Research. She is a Middle East expert with extensive policy, analytical, and practical experience on Arab political reform and democracy promotion. Prior to joining POMED in October 2015, Hawthorne served as Resident Senior Fellow with the Atlantic Council’s Rafik Hariri Center for the Middle East, where she focused on U.S. policy toward Egypt and U.S. and European strategies to support political and economic reform in the post-2011 Arab world, with a concentration on Tunisia. Before joining the Atlantic Council in April 2013, Hawthorne was an appointee at the U.S. Department of State for two years, where she helped to coordinate U.S. support for Egypt’s transition and advised on the U.S. response to the Arab Spring. Hawthorne previously served as founding executive director of the Hollings Center for International Dialogue, a nongovernmental organization operating in Washington and Istanbul that promotes mutual understanding between the United States and predominantly Muslim countries.