Another Birthday Behind Bars: The UAE’s Unjust Imprisonment of Ahmed Mansoor 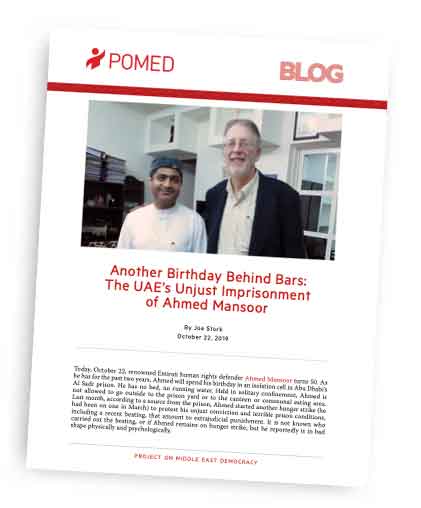 Today, October 22, renowned Emirati human rights defender Ahmed Mansoor turns 50. As he has for the past two years, Ahmed will spend his birthday in an isolation cell in Abu Dhabi’s Al Sadr prison. He has no bed, no running water. Held in solitary confinement, Ahmed is not allowed to go outside to the prison yard or to the canteen or communal eating area. Last month, according to a source from the prison, Ahmed started another hunger strike (he had been on one in March) to protest his unjust conviction and terrible prison conditions, including a recent beating, that amount to extrajudicial punishment. It is not known who carried out the beating, or if Ahmed remains on hunger strike, but he reportedly is in bad shape physically and psychologically.

In May 2018, more than a year after security forces broke into his home in the dead of night and took him away from his wife and four young sons, an Emirati state security court sentenced Ahmed to 10 years in prison, plus three years of probation, and imposed a fine equivalent to around $250,000. His crimes? The court said that he was guilty of “insulting the status and prestige of the United Arab Emirates (UAE) and its symbols, including its leaders” and “publishing false reports and information on social media.”

What were these “insults” and “false reports,” so awful as to warrant a decade in prison, mostly in solitary confinement? We do not know, because Ahmed’s trial was closed, and neither the charge sheet nor the court ruling has been made public. What we do know is that Ahmed dared to use Facebook, Twitter, and other social media platforms to call attention to human rights abuses and miscarriages of justice in the UAE (as well as in other Arab countries). He also dared to provide information to rights organizations abroad about the unfair trials that have put nearly every other Emirati rights activist and defense lawyer in prison on charges that, like his own, stemmed from their attempts to exercise universal rights of free speech and peaceful association.

The UAE is the country, of course, that staged an international “World Tolerance Summit” in November 2018 and declared 2019 the “Year of Tolerance.” Beneath this Orwellian façade, there is zero tolerance in the UAE for political dissent, no matter how peaceful. Since 2011, the government has forcibly disbanded civil society organizations, such as the Jurists’ Association and the political society Al Islah (Reform), that represented political opinions different from those of Emirati rulers. There is no independent media, which is precisely why Ahmed’s reporting via social media was so important, and so intolerable to the authorities. Citizens and other residents of the Emirates who raise human rights concerns risk arbitrary detention and long prison terms.

I got to know Ahmed about 10 years ago, when he joined the advisory committee of Human Rights Watch’s Middle East division, where I worked. We also served together on the board of the Gulf Centre for Human Rights. I last visited him in the UAE in September 2013. Ahmed, an engineer by profession, is a gentle, soft-spoken man. He is determined to fight, peacefully, for basic civil and political rights, for fair trials, and for a democratic opening in his country.

The UAE’s authoritarian neighbors such as Bahrain, Iran, and Saudi Arabia also severely punish peaceful critics and dissenters. But in those countries the imprisoned critics, to varying degrees, represent larger currents in their societies. The persecution of Ahmed Mansoor—and that is the appropriate word given the severity of extrajudicial punishment his jailers have inflicted on him—seems gratuitous, inasmuch as he was, as he liked to say, the “last man standing,” the only person publicly calling for human rights, with no organization or movement in the UAE defending him.

His imprisonment is inexcusable, although UAE officials continue to try to excuse it. In June, five U.S. senators (Cory Booker, Sherrod Brown, Chris Coons, Richard Durbin, and Patrick Leahy) wrote to the UAE Ambassador in Washington Yousef Al Otaiba requesting “an update on [Ahmed Mansoor’s] well-being and plans for a timely release.” Al Otaiba responded by asserting that Ahmed had engaged in “impermissible sectarian hate speech” and “incite[d] violence.” Neither Ambassador Al Otaiba nor any other UAE official has ever produced a single statement of Ahmed’s that would fit such a characterization.

Al Otaiba also claimed that “Mr. Mansoor was afforded due process like all other defendants in UAE courts.” It is true that Ahmed’s trial was much like those in which the UAE sentenced other peaceful critics to long prison terms, but “due process” would hardly be the term one could apply. According to credible international reports, there is little due process when it comes to political dissent in the Emirates. For example, the UN Special Rapporteur on the independence of judges and the judiciary noted that she was “particularly concerned at reports of serious breaches of fair trial and due process guarantees, especially regarding, but not limited to, crimes related to State security.” And the UAE chapter of the most recent U.S. State Department Country Reports on Human Rights Practices observed, albeit in more delicate wording, that “[d]efendants’ rights were circumscribed in national security cases or cases the judge deemed harmful to public security.”

One of the most remarkable features of the UAE’s authoritarianism has been its insulation from international criticism—much more so than with Saudi Arabia, for instance. For the United States, outside of the exceedingly careful passive-voice critiques in the State Department human rights report, one looks in vain for a single criticism of the UAE’s terrible human rights record from the White House or the rest of the executive branch. This shameful silence has been the pattern since well before the presidency of Donald J. Trump with his demonstrated affinity for dictators.

The Obama and Bush administrations similarly failed to utter any negative assessments of the systemic human rights problems in the UAE. The very limited criticism from Congress has been quite recent and focused on allegations of abuses by UAE forces and its armed proxies in the Yemen conflict, rather than on the UAE’s ongoing silencing of peaceful domestic dissent, which makes the five senators’ recent letter to Ambassador Al Otaiba all the more unusual and welcome.

In Brussels, the European Parliament passed a strong resolution last October condemning Ahmed’s conviction and calling on UAE authorities to release him unconditionally and to drop all charges. But EU foreign affairs officials have noticeably failed to call for his release, content to note, blandly and impersonally, that “no one shall be detained merely on the grounds of peacefully expressing his or her opinions.” I have been unable to unearth a single official statement from any European capital criticizing the UAE’s persecution of Ahmed or backing his freedom.

Today, on Ahmed’s 50th birthday, supporters in several North American and European cities are staging solidarity protests at UAE diplomatic missions and presenting to Emirati officials an open letter signed by some 140 international and regional human rights groups calling for his immediate and unconditional release. It is well past time for Washington, London, and other capitals to sit up and listen and insist in their own voices that the UAE’s pretensions of tolerance have no credibility as long as Ahmed Mansoor remains behind bars.

Joe Stork is a deputy director in the Middle East division of Human Rights Watch and chair of the advisory board of the Gulf Centre for Human Rights.