Freedom House recently published its prominent annual report, Freedom in the World, which assesses the state of political rights and civil liberties in 210 countries and territories. POMED’s Amy Hawthorne asked Freedom House’s Amy Slipowitz, the research manager of Freedom in the World, about key findings for the Middle East and North Africa (MENA) and Turkey in the 2021 report, which covers developments during 2020.

POMED: First, tell us a bit about Freedom House’s methodology.

Amy Slipowitz: Each of the countries and territories covered in the report is examined using the same methodology, which contains 25 indicators covering different aspects of political rights and civil liberties, on a scale from 0 to 100 (0 being the least free). This score determines whether the country is Free, Partly Free, or Not Free. Our methodology is based on the Universal Declaration of Human Rights, and has been developed with input from scholars from around the world.

Countries and territories are evaluated by external analysts, who cover one or more countries. The analysts score countries and territories based on the conditions and events during the coverage period. These proposed scores are then discussed among the analysts, outside advisers, and Freedom House staff at a series of regional review meetings. The end result represents the consensus of all the participants. 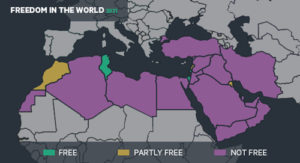 How did the MENA region overall fare in 2020?

Looking at this from a population perspective, only 5 percent of people in the MENA region live in Free countries, while 85 percent live in Not Free countries.

Which MENA countries got the lowest overall scores? And where did the situation get worse during 2020?

Syria has the lowest overall score, both regionally and globally, at 1 out of 100. In the MENA region, Saudi Arabia has the next lowest score, at 7 out of 100, followed by Libya at 9. Egypt received a score of 18, a drop of three points from 2019.

Jordan is a place that got worse in 2020. Jordan actually declined from Partly Free to Not Free because of the general crackdown on assembly, featuring the detention of thousands of teachers participating in strikes and protests, and the dissolution of the Teachers’ Syndicate that led this movement.

Transparency and freedom of personal expression fared poorly in 2020. The Iranian regime, for example, obscured the true toll of the COVID-19 pandemic, while transparency in Lebanon has floundered in recent years, including around the massive explosion in Beirut last August. Authorities in Algeria arrested or imprisoned numerous journalists, activists, and supporters of the anti-government protest movement for expressing their views on social media.

How did Tunisia, the Arab world’s only democracy, come out in 2020?

Along with Israel, Tunisia is one of only two Free countries in MENA and has the second highest score in the region (note that we assess the West Bank and Gaza Strip as separate territories). Peers include Botswana and Timor-Leste.

Globally, Tunisia has experienced the largest 10-year improvement of any country in the world, gaining 48 points on our 100-point scale over the last decade. It continued to improve in 2020, as protests and demonstrations have generally been able to proceed with less police intervention and fewer arrests than in the previous two years.

Police violence remains a problem, though, as do other challenges like corruption and pressure against independent media and NGOs.

And how did Turkey do?

Unrelated to the pandemic but equally concerning were the continued prosecutions and harassment against opposition figures, civil society leaders, independent journalists, and other government critics.

It’s worth noting that globally, Turkey has experienced the second-largest score decline over the last decade, falling by 31 points (behind only Mali).