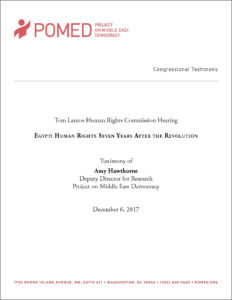 In her testimony, Hawthorne described how, since the ouster of President Mohamed Morsi in July 2013, “Egypt has descended into a military autocracy…the country is governed by fear, instead of by the rule of law.”

Laws, however, are very important to this authoritarian system. Hawthorne’s testimony focused on the repressive legal framework being constructed by the regime of President Abdel Fattah al-Sisi, and the role of the parliament in this process. Hawthorne recommended that U.S. officials press Egypt’s government on three pivotal laws in particular: The protest law, the NGO law, and the anti-terrorism law. “Each of these laws blocks the exercise of fundamental rights that are essential for a peaceful and tolerant society,” she explained. (For more on these laws, see the POMED factsheet “Egypt’s Antidemocratic Parliament.”)

Regarding the risks of al-Sisi’s vast crackdown, Hawthorne argued: “The state’s determination to crack down on all nonviolent opposition diverts attention and resources from the difficult fight against terrorism. Such repression can also breed anger and despair, enlarging the pool of disaffected Egyptians from which terrorist groups can draw support.”