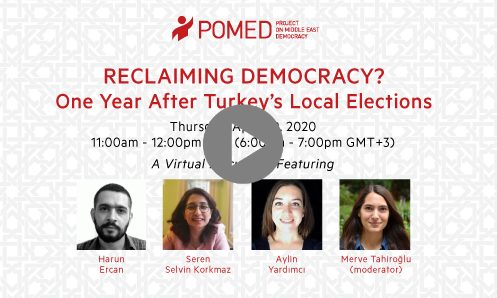 Just over a year ago, opposition candidates won the mayoralties of İstanbul, Ankara, and nine other cities across Turkey in a striking political upset for President Erdoğan. Now, the COVID-19 crisis has put the spotlight back on these opposition mayors. As they struggle to protect their cities’ residents and minimize the pandemic’s humanitarian costs, Erdoğan has shut down their soup kitchens, blocked their fundraising activities, and imposed erratic curfews—all to deny his emerging rivals any political credit. These are only Erdoğan’s latest interventions against the opposition mayors and their efforts to reclaim democracy in their cities.

Please join us on April 30 for a virtual panel discussion on Turkey’s opposition mayors, one year after the municipal elections.

HARUN ERCAN served as an international affairs advisor to the co-mayors of Diyarbakır. He is currently a PhD candidate at the State University of New York at Binghamton, studying conflict resolution, social movements, and authoritarianism. He has taught courses on Turkish political history at Koç University and was a founding editorial board member of Toplum and Kuram, Turkey’s first academic journal to focus on Kurdish issues.

SEREN SELVIN KORKMAZ is the co-founder and executive director of IstanPol Institute, an independent think-tank in Turkey. She is a PhD candidate and researcher at Stockholm University Institute for Turkish Studies (SUITS). Previously, she was a Fox International Fellow at Yale University. Until 2017, she was the Turkey director of the Political and Social Research Institute of Europe (PS:EUROPE), an Austria- and Turkey- based institute that she co-founded. She is a political commentator frequently appearing both in Turkish and international media.

AYLIN YARDIMCI is a digital media editor at the İstanbul Municipality (İBB) under Mayor Ekrem İmamoğlu and a PhD candidate of international relations at Koç University. Before joining the municipality, she was an anchor for the English-language weekly news program “This Week in Turkey” at the independent online media channel Medyascope TV.

MERVE TAHIROĞLU (moderator) is POMED’s Turkey Program Coordinator. Prior to joining POMED, Merve was a research analyst at the Foundation for Defense of Democracies, where she focused on Turkey’s domestic politics, foreign policy, and relationship with Washington. She has authored several monographs on Turkey and published articles in various outlets such as Foreign Affairs, Washington Post, Wall Street Journal, Foreign Policy, Politico, and Huffington Post.